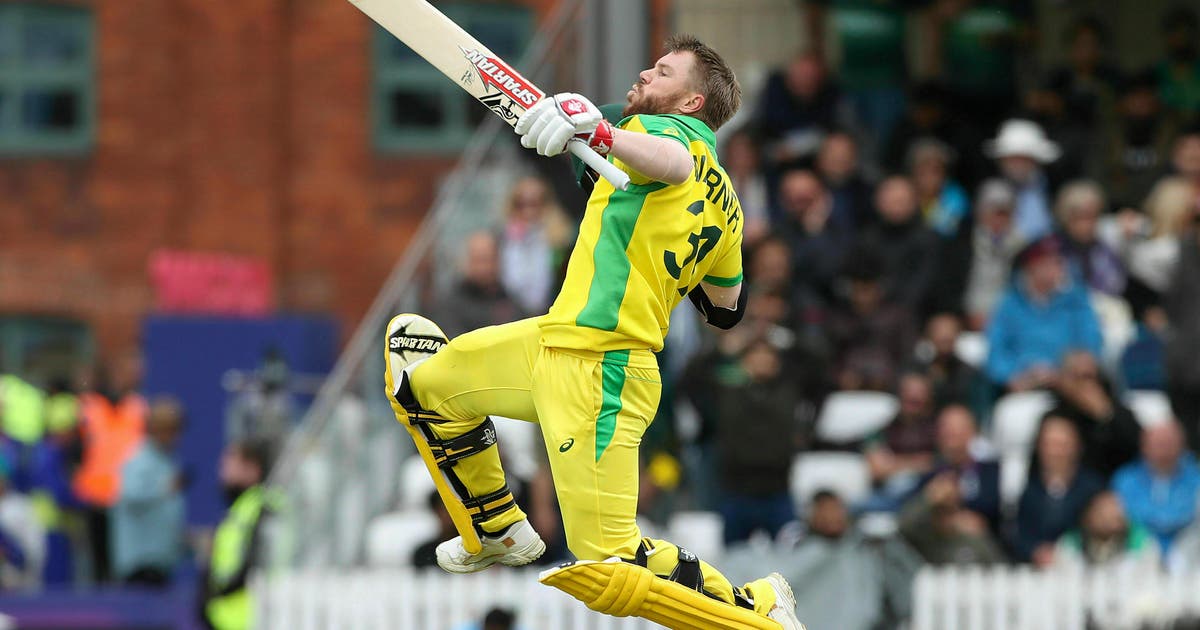 It became the background noise at the Cricket World Cup for David Warner, something he expected in England in the wake of a 12-month ban from the Australian team for his involvement in a ball-tampering saga last year.

He’s been methodically walking the road to redemption with the Australian cricket public, which was rocked by the cheating scandal, but in hostile territory he needed to let his cricket do the talking.

Even when he was scoring runs — he’d scored two half-centuries in Australia’s first three games at the tournament — critics questioned why he wasn’t scoring quickly.

So when Warner squeezed a shot between wicketkeeper and slip in the 36th over of Wednesday’s game against Pakistan to post his first century for Australia since December 2017, he sprinted up the pitch with his helmet in one hand and his bat in the other and leaped in the air to celebrate.

He scored his hundred from 102 balls, stroking 11 boundaries and a six, but was out soon after for 107, a good proportion of the Australia’s total of 307.

Warner was actually applauded as he left the field at Somerset’s County Ground. Pakistan captain Sarfaraz Ahmed said before the game that the Pakistani people wouldn’t boo the Australians because they loved cricket and respected the players. It turns out, he was right.

Of course, there was raucous cheering in Australia’s dressing room for Warner, Australia’s vice-captain Pat Cummins noted after the defending champions finished off their 41-run win over Pakistan. They were so proud, Cummins said of the Aussie squad, after the tumultuous 15 months for Warner and for his family.

“Going through those tough times and sort of regrouping with myself to put myself in the best position to come back to international cricket, I did everything I could,” Warner said. “Really, really knuckled down and trained my backside off.

“And I’m just grateful for this opportunity. We’ve got a great sort of group harmony, a lot of smiles on the faces as you can see in a lot of the training sessions and out in the field. So, look, I’m pumped.”

Warner and former skipper Steve Smith were banned for a year and Cameron Bancroft for nine months amid massive backlash in Australia for their roles in a clumsy plot to change the condition of the ball in a test match in South Africa by rubbing it with sandpaper.

Bancroft was caught in the act by South African broadcasters. It later emerged that he and Warner hatched the plan, and Smith didn’t do enough to stop it. Cricket Australia dished out the harshest penalties ever imposed for ball-tampering.

It cost Smith and Warner millions of dollars in salary and endorsements, and their positions as leaders of the revered national cricket team.

There were tearful news conferences on their returns to Australia after the scandal broke in March last year. That was the last time Warner really faced a news conference — until Wednesday. Smith and Warner, both recalled in time for the World Cup, haven’t exactly been front-and-center in public appearances for the team.

Now a year older, with a beard, and with his wife due to have their third child any week, Warner couldn’t conceal his satisfaction with his milestone innings. It was only a matter of hours before he was due to reunite with his wife, Candice, and two daughters as the Australian players headed back to London to gather with their families again.

“I was always coming back to international cricket if selected — the thing that kept me going was my wife and my kids,” Warner said. “Got great support at home, my family. And my wife is just, she’s just my rock. She’s unbelievable. She’s determined, disciplined, selfless.

“And I hold a lot of credit to her. She’s a strong woman. She got me out of bed a lot in those first 12 weeks, and got me back running and training hard as I could.”

An often abrasive character who’d had the odd run-in with rivals, fans, and cricket authorities in an international career that commenced in 2009, Warner was never popular with crowds when Australia toured abroad.

He reckons the booing is “water off a duck’s back,” and something “I’ve heard my whole career … makes us knuckle down and try to score more runs if anything.”

Warner isn’t expecting the booing to stop. But he’s not playing for anyone who doesn’t support his team.

“As I’ve said before, I’m just really looking forward to what’s coming ahead of us here in the World Cup,” Warner said. “Pumped to be back, and the boys are on fire here.”