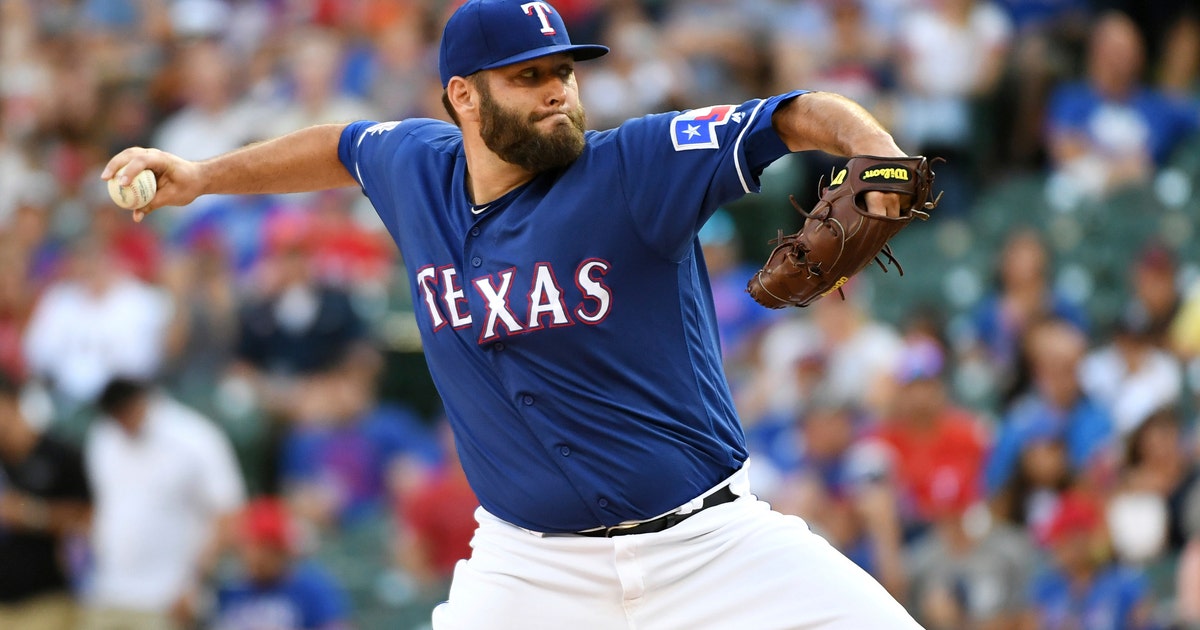 ARLINGTON, Texas (AP) — Lance Lynn matched his season high with 11 strikeouts in seven stellar innings for his major league-best 12th victory and the Texas Rangers beat the AL West-leading Houston Astros 5-0 in the only game Thursday night when Major League Baseball resumed after the All-Star break.

Lynn (12-4) won his fifth consecutive start, and is 8-1 over his last 10 starts. He scattered six hits (five singles and a double) and walked two while throwing 75 of 110 pitches for strikes.

Astros lefty Framber Valdez (3-5) didn’t make it out of the first inning, when Texas jumped ahead with four runs.

Houston (57-34) still has a seven-game division lead over Oakland, with the Rangers (49-42) eight games back in third place.

Lynn, who signed a $30 million, three-year free agent deal over the winter after pitching for Minnesota and the New York Yankees last year, is 8-0 with a 3.90 ERA in 10 home starts for the Rangers.

Jose Leclerc and Chris Martin each pitched an inning to wrap up the fourth shutout for the Rangers this season. It was the sixth time Houston was held scoreless.

After Elvis Andrus got Texas on the board in the first with an RBI groundout, sluggers Nomar Mazara and All-Star outfielder Joey Gallo had less-traditional hits. Mazara had an infield single when the ball spun off his shattered bat at 44 mph and barely got past the mound, then Gallo drove in a run with a double that ricocheted hard off second baseman Jose Altuve and never got out of the infield.

Rougned Odor, still hitting .198, made it 4-0 when he drove in two runs with the first of his two doubles. Odor doubled again in the third, and then scored on a single by Jeff Mathis.

Astros shortstop Alex Bregman left after a groundball bounced up and hit the All-Star on the chin in the third inning. The team said he had a lacerated chin. Bregman was shifted toward the middle of the infield when he went to field a grounder hit by Shin-Soo Choo. The ball took a late high hop and caught Bregman squarely below the mouth.

Astros: RHPs Brad Peacock and Joe Smith threw in rehab games for Double-A Corpus Christi at nearby Frisco before joining the Astros for their first series after the All-Star break. Both could be activated soon.

Rangers: Hunter Pence, out since June 17 (right groin strain), started a rehab assignment by going 0 for 3 with a walk as the DH for Double-A Frisco. Manager Chris Woodward said Pence, who didn’t get to play in the All-Star Game after being voted in as the AL starting DH, would probably have another game at Frisco.

Astros All-Star right-hander Gerrit Cole (9-5), who has won his last five decisions and leads the AL with 170 strikeouts, is 1-2 with a 6.61 ERA in three starts this year against Texas. He still has 29 strikeouts over 16 1/3 innings. Jesse Chavez (3-4, 3.30) makes his fourth start since moving from the Rangers bullpen to their rotation. It will be his 38th appearance overall this season.