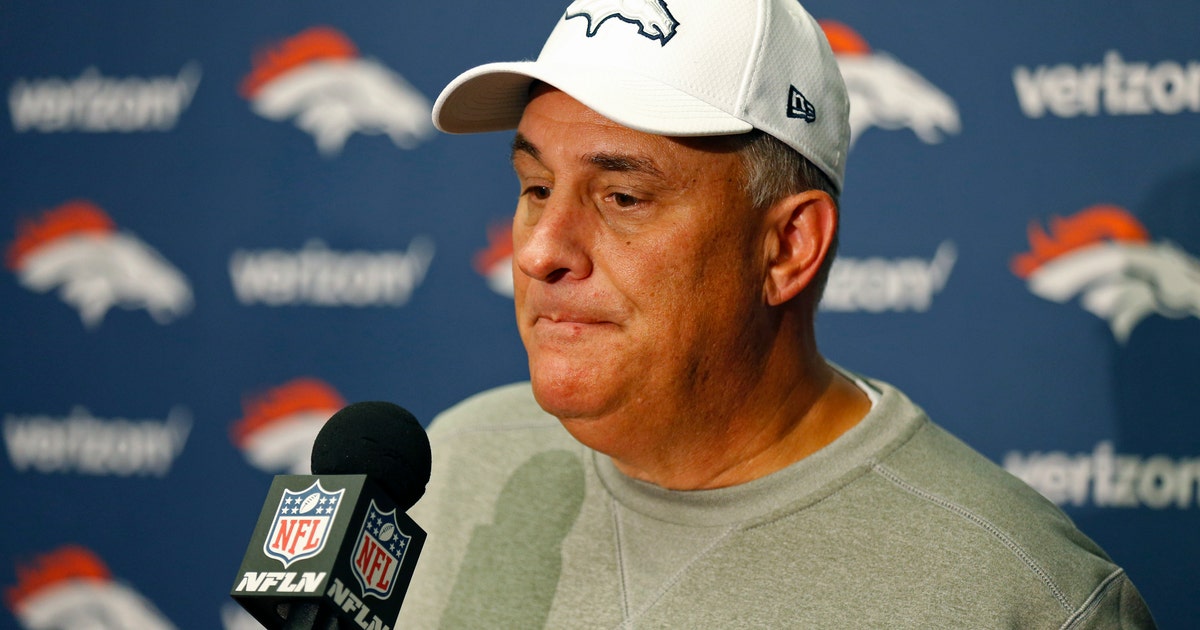 ENGLEWOOD, Colo. (AP) — Vic Fangio isn’t treating Sunday’s game against his ex as anything other than a chance for the Denver Broncos to get their first win and to prevent the Chicago Bears from doing the same.

“It really is just another game, especially coming off” a season-opening 24-16 loss to Oakland, Fangio said Wednesday. “We need to go out there and play a little bit better no matter who we’re playing.”

Not that the gridiron grinder who’s both ruffled in his appearance and unruffled in his demeanor will blow off his buddies from Chicago, who are coming off a 10-3 loss to the Packers at home to kick off the NFL’s 100th season.

“It’ll be a little different once I see all those guys in pregame and whatnot,” Fangio said. “But after they kick it off, it will be another NFL football game.”

Fangio constructed a top-notch defense in Chicago from 2015-18 after working his magic with the 49ers, Texans, Colts and Panthers.

The Bears led the league last year in scoring defense, rushing defense, yards per play, takeaways, interceptions and three-and-outs while on their way to a 12-4 record and their first playoff appearance since 2010.

It was the capstone of a four-decade-long audition for his first NFL head coaching job, which he finally landed by winning over John Elway with his “death-by-inches mantra” based on his aversion to cutting corners.

Fangio quickly won over the locker room, too, with his low-key style that’s both newfangled and old-fashioned. Von Miller, whom Fangio had called out on Day 1, suggesting Denver’s best player could be even better, presented him with a gray sweatshirt for his 61st birthday .

Fangio immediately began emptying his mental notebook of things he wanted to do if he ever got a head coaching job. He ditched the loose practice jerseys lest players get lulled into bad habits and holding calls. He got rid of the blaring music at practice so he didn’t have to yell over the noise, and he banned hazing haircuts for rookies.

“I think it’s probably long overdue that he got his shot. I’ve long respected his style,” said 49ers general manager John Lynch, who got to know Fangio while broadcasting NFL games after his playing career ended.

One particular production meeting in San Francisco in 2011 stuck with Lynch.

“I remember saying, ‘Hey, you just came from Stanford. I know you’ve been in the league, you’ve got Pat Willis and you’ve got Navarro Bowman,’ and he’s like, ‘Yeah, they’re all right,’” Lynch said. “But his point was there’s a few great players and if we use ‘great’ all the time” it’s unfair to the truly transcendent stars.

“I think that’s the way he looks at things. He doesn’t get too blown away. But he believes in sound football and his teams play that way. I think he deserves this opportunity. I’m thrilled to see him have it.”

So is 49ers cornerback Richard Sherman, who played for Fangio at Stanford in 2010 when Fangio worked for Jim Harbaugh and the Cardinal went 12-1 with three Pac-12 shutouts and an Orange Bowl win.

“I think he should have been a head coach a long time ago,” Sherman said. “I think this is the right fit.”

Bears coach Matt Nagy said when he got his first head coaching job last year, he leaned heavily on Fangio.

“He’s super competitive and he wanted to win every practice against the offense. I think it helped me a lot,” Manning said.

“I’m happy for him getting his opportunity to be a head coach. He has certainly paid his dues. He is all football. He is grinder. And I think he’ll do a great job.”