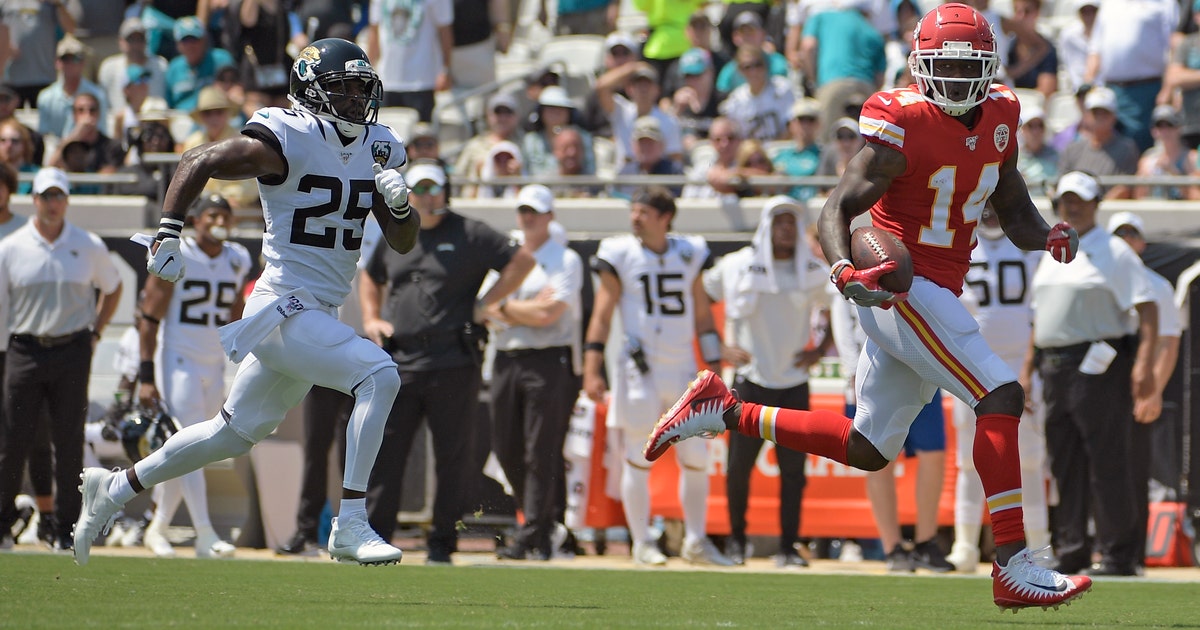 KANSAS CITY, Mo. — Sammy Watkins told anyone who would listen that he was poised for a resurgent season.

The Chiefs wide receiver was healthy for the first time in what seemed like forever. He toiled tirelessly on the practice fields all summer with quarterback Patrick Mahomes. He refined his route-running, protected his body and arrived at Week 1 in better shape than ever.

It showed. All of it.

The former fourth overall pick of the Buffalo Bills, who for years has underachieved at best and been considered a bust at worst, dominated the touted Jacksonville defense. Watkins hauled in nine passes for 198 yards and three touchdowns, pacing the Chiefs to a 40-26 rout in Sunday’s opener.

“I know how to practice now and I know what Coach wants out of me,” Watkins said. “So if I come out every day at practice and put the work in, I think hard work and practice lead to great games.

“I’ve got to continue to just stack that and move forward to the next game.”

The next game comes Sunday in Oakland.

The pressure will be on Watkins, too. Not only will he try to replicate his big-play performance against the Jaguars, he’ll be counted on to pick up some slack for injured star Tyreek Hill.

Hill fractured his collarbone early on against Jacksonville, and that was a big reason Mahomes kept going back to Watkins. But with Hill sidelined for at least a month — and possibly much longer — it falls on the Chiefs’ No. 2 receiver to produce like a No. 1 target.

Just as he did last week.

“We’ve said it all offseason: Sammy, the way he has prepared his body, the way he’s practiced. He really understands the offense at a different level than he did last year,” Mahomes said.

“I mean, the first play that he scored, whatever-yard touchdown that was, he was like the third or fourth read, he made someone miss and he scored. So, just having a better understanding of the full offense lets him play faster and he can see that the offseason is paying off.”

For the record, that was a nifty 68-yard scoring strike in which Watkins made Jaguars star Jalen Ramsey look bad. He later hauled in a 49-yard touchdown strike before adding a short TD catch in the fourth quarter to put the finishing touches on the best game of his career.

The yardage was a career best. So was the touchdown total.

In fact, you have to go back to Watkins’ days at Clemson to find a similar performance. He caught 16 passes for 227 yards and a pair of touchdowns in the Orange Bowl against Ohio State in January 2014, but even in college he never had more than two TD catches in a game.

“From the first (catch) on, you saw him break tackles and split seams. There were no indecisions after catches,” Chiefs coach Andy Reid said.

“He’s big, he’s fast and he is strong. We’re moving him all over the place and he is smart, so that helps. I think that combination is what contributed to that (performance). We asked him to play that zebra position and he didn’t blink at that. He said, ‘Put me in and let me go and I will do my thing.’ He plays inside and outside.”

In Reid’s offense, the “zebra” plays inside — essentially as a slot receiver. And while that is often considered a less coveted or important job, Watkins has flourished given chances in it.

It helps that he is finally healthy. Watkins has dealt with foot injuries for most of his career, along with a concussion two years ago, bruised ribs, strained groins and a myriad of other maladies.

“Just to have him out there, flying around and making plays, I mean, he is someone that seems like he is in great shape. He’s flying around every single rep and doing whatever he can to make sure that he is in the best possible situation.”

NOTES: Hill has started rehab in Kansas City after spending a night in a Jacksonville hospital and returning Monday. “I know there is speculation about how long, but he’s truly a week-to-week injury,” Chiefs trainer Rick Burkholder said. “He will be listed as out this week.” … Mahomes practiced Wednesday after spraining his ankle against the Jaguars.