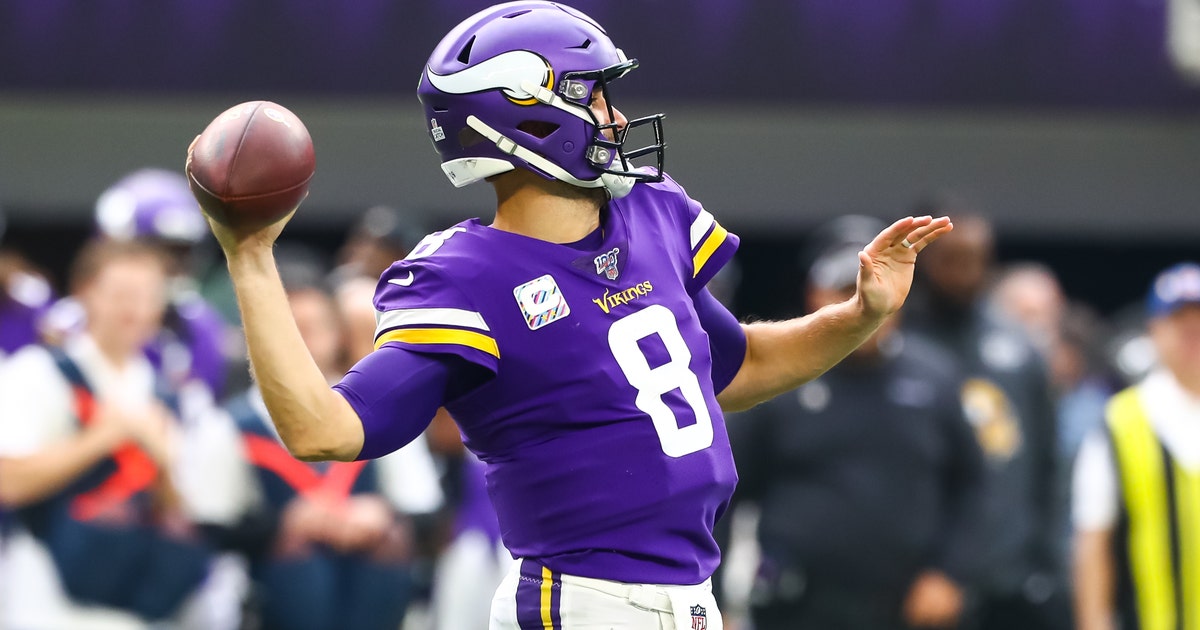 MINNEAPOLIS — The Minnesota Vikings shifted their strategy this season, determined to re-establish a running game that could not only get them in the end zone more but dominate an opponent when they need it to.

There’s still plenty of space to turn Kirk Cousins loose, though, and the deep ball was on full display against Philadelphia.

“He made some great throws,” coach Mike Zimmer said, “whether it was on the move or out of the pocket.”

Two weeks after Cousins struggled badly in defeat at Chicago, their hyper-scrutinized quarterback is in a groove after back-to-back 300-yard games. He threw for four touchdowns to beat the Eagles 38-20 on Sunday, including a pair of home runs to Stefon Diggs in the second quarter that each covered more than half of the field.

“Man, anytime you see that ball fly in the air like that and it comes down and it’s six points for the home team, that’s what it’s all about, you know?” an appreciative linebacker Eric Kendricks said. “I always like seeing that. I mean, who doesn’t? Every person whoever watches football likes watching that.”

Cousins went 22 for 29 and took one sack. One-third of those passing plays called by offensive coordinator Kevin Stefanski included a run fake by Cousins, and half of those had Cousins rolling out on a bootleg away from the run-blocking. The play action has long been a strength for Cousins, and that showed against the Eagles.

“It was an aggressive, creative game plan, and credit Kevin for the way he just kind of kept it unpredictable,” Cousins said.

After taking his share of heat last month for those performances against NFC North rivals Green Bay and Chicago, Cousins has so far delivered.

“He’s a guy we trust every week. He’s going to give us his all, and he’s going to keep getting better,” wide receiver Adam Thielen said. “He’s going to prove that he’s a top quarterback in this league and that he can play at a high level.”

Here’s a closer look at the Vikings at the six-game mark:

The pass protection was a significant problem for Cousins in the game on Sept. 29 against the Bears, leading to a lost fumble among six sacks and causing him to settle for short, safe throws at the expense of some opportunities to throw to openings Diggs and Adam Thielen had further up and down the field.

Over the past two games against the Giants and Eagles, though, Cousins has completed 44 of 56 passes and averaged 11.4 yards per attempt. The NFL leader for the season is Patrick Mahomes with 9.1, and Cousins is third.

While the outside coverage by cornerbacks Xavier Rhodes and Trae Waynes was strong and the Vikings kept Eagles tight ends Zach Ertz and Dallas Goedert quiet, but running back Miles Sanders caught three passes for 86 yards out of the backfield. Zimmer said he made the wrong call on one of those plays.

After minimal involvement in the offense over the first four games and then causing a stir with an unexcused absence from practice and cryptic comments about his desire to remain with the team, Diggs is suddenly on pace for an 1,100-yard season.

“When you get that guy going, watch out,” Thielen said. “We know that we have to get him the ball, because he’s a special player and one of the best in the game. We are blessed to have him on our side.”

After two strong games, singling out an individual player for substandard performance is quite a stretch. Punter Britton Colquitt had one 35-yarder in the third quarter on Sunday that gave the Eagles the ball at their 45 before kicking a field goal to pull within 24-20.

The offensive line held up especially well against an accomplished front seven for the Eagles, particularly considering right guard Josh Kline was held out with a foot injury and left tackle Riley Reiff hurt his ankle and didn’t play in the second half. Dakota Dozier and Rashod Hill capably filled in.

On defense, cornerback Mackensie Alexander returned from his third absence in four games with an interception, a half-sack, and a quarterback hit. Linebacker Ben Gedeon was held out with a concussion.

46 — Career sacks for Danielle Hunter, who set the record for the most sacks in NFL history for a player under age 25. Hunter, who has two more games before his 25th birthday, is tied for fourth in the league this season with six sacks.

After losing their first two intradivision road games, the Vikings will visit Detroit on Sunday. With a home game against struggling Washington following four days after that, they have a prime opportunity to extend their momentum and keep pace in a strong NFC North. Cousins passed for 253 yards and three touchdowns without a turnover in a win on the road over the Lions last year.