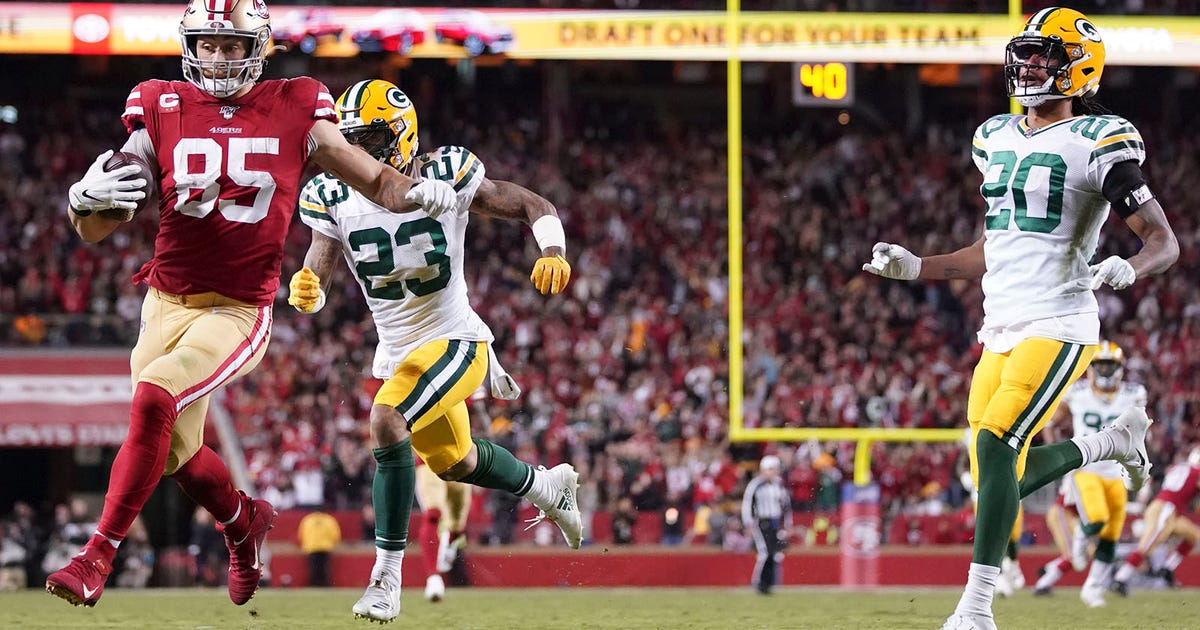 SANTA CLARA, Calif. — When Aaron Rodgers greeted Jimmy Garoppolo following the least productive start of his sterling career he had a simple message for the San Francisco 49ers quarterback: “We’ll see you later on.”

Less than two months after that lopsided loss, the Green Bay Packers quarterback has proven prophetic. For the eighth time in the past 25 seasons Green Bay and San Francisco are squaring off in the postseason, this time with a berth in the Super Bowl on the line.

“We know it will be different,” 49ers coach Kyle Shanahan said. “That game got away from them early. That’s definitely not the team we’ll see this week. Everyone knows how good Green Bay is, how good their coaching staff is, how good their players are, how good their quarterback is. … That game really holds zero relevance to what’s going to happen this Sunday.”

The Packers (14-3) looked nothing like a Super Bowl contender back on Nov. 24 when they were completely overwhelmed by the 49ers (14-3) from the start. Rodgers was strip-sacked by Fred Warner on the opening drive and Nick Bosa returned the fumble to the 2, setting up Tevin Coleman’s TD run.

The Niners added a couple of field goals and got a fourth-down stop against Aaron Jones before breaking that game open at the end of the first half with a 42-yard TD pass from Garoppolo to Deebo Samuel and a third field goal from Chase McLaughlin in the final 65 seconds of the half to make it 23-0.

Rodgers threw a TD pass in the third quarter to Davante Adams only to have the Niners answer two plays later on a 61-yard pass to George Kittle, and the rout was on. The 37-8 final was the second-most lopsided loss in Rodgers’ career in a game he didn’t get injured.

“I’d like to think we’ve improved through the course of the season, especially the last six weeks or whatever it’s been,” coach Matt LaFleur said Monday. “Certainly I don’t think we played our best that day. You got to give them a lot of credit, there’s probably a reason for that. That’s a really talented football team. We know that. But in order to compete with them, in order to have a chance to beat them, we’re going to have to be at our best.”

Rodgers finished the game 20 for 33 for 104 yards and had a career low with only 3.15 yards per attempt. He was also sacked five times for 38 yards, with right tackle Bryan Bulaga leaving early in the first quarter with a knee injury. The 1.9 net yards per pass play were the lowest for the Packers since 1991, the year before Brett Favre arrived.

“We’ve got to play a lot better, obviously,” Rodgers said. “They’re a great football team, have a great front, obviously get after the passer and don’t need to rush a lot of guys to do that. (They have an) excellent pass rush, really good on the back end, smart.”

The Packers haven’t lost since, winning the final five games of the regular season and then the playoff opener over Seattle 28-23 on Sunday to set up the rematch. San Francisco beat Minnesota 27-10 on Saturday.

Green Bay should have Bulaga back even though he missed Sunday’s game with an illness. The Niners also are healthier with edge rusher Dee Ford, left tackle Joe Staley, linebacker Kwon Alexander and running back Matt Brieda all back after missing that game.

In nine of those cases, the team that got blown out earlier in the season came back to win in the playoffs, and in six other games the team lost by a touchdown or less.

Shanahan said he doesn’t believe his players will be complacent because of the lopsided win two months ago but has a message for them if they do.

“Don’t be that stupid because that’s not real,” he said. “This is about Sunday’s game. I can give a thousand stories of things like that, playing games in my history I’ve been a part of.”

No match-up has occurred as frequently in the past quarter-century, with the eighth meeting this week putting Green Bay-San Francisco three games ahead of any other rivalry. In fact, the only teams to play more than eight times in the postseason in the Super Bowl era are the Rams and Cowboys, who met for the ninth time last January.

The Packers have won four of those previous seven meetings, going 4-1 with Favre at quarterback and losing both times with Rodgers as starter in the 2012-13 seasons when he was outdueled by Colin Kaepernick.