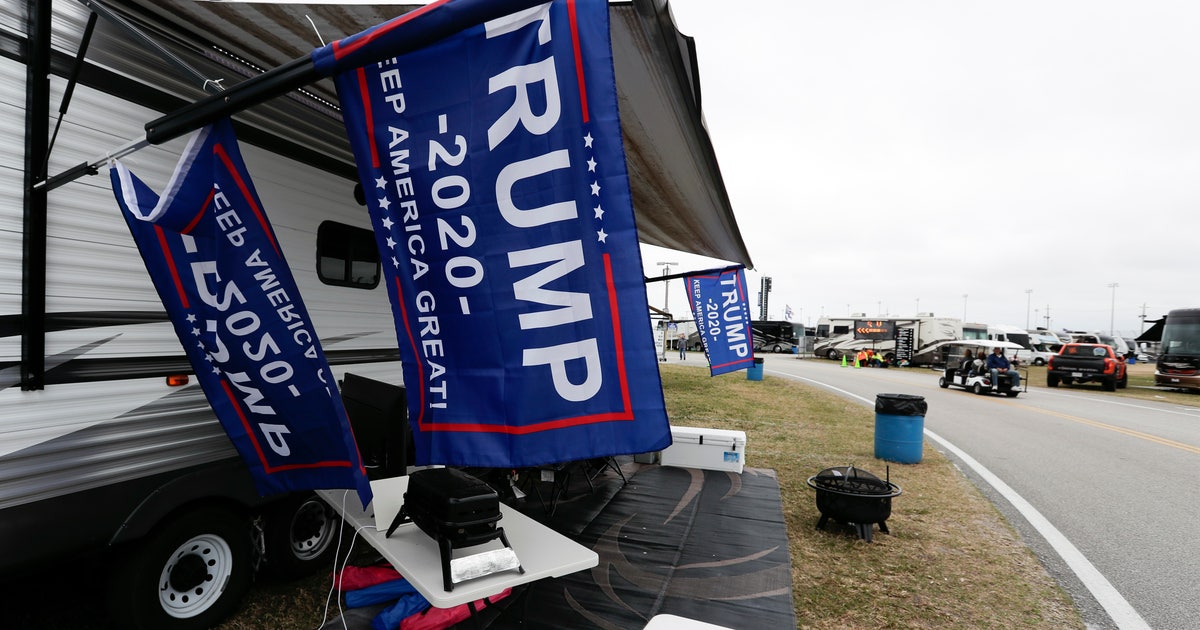 DAYTONA BEACH, Fla. (AP) — Stroll through the Daytona infield and fans can grab a seat next to President Donald Trump and get a sweet taste of impeachment.

Debi Ringhaver is mixing cocktails for curious NASCAR fans who stop in their tracks at the sight of her lifesize mannequin of Trump, chilling on a lawn chair, holding a book titled “The Truth Behind Trump” and wearing a red “Donald Trump 2020” baseball cap.

Hundreds have stopped by her RV this week for a selfie or a chat or a sip of “The Impeachment,” a blend of peach vodka, champagne and peach nectar. The “Subpoena Colada” also is in the blender, but Ringhaver concedes “it’s just a pina colada with a better name.”

Ringhaver placed a book in Trump’s grip because so many of her friends sat on his lap when she kept him at her Florida home, they broke his hands.

“They get real enthusiastic,” she said, laughing. “They get kind of excited about having Donald at the ranch.”

NASCAR fans are ecstatic about the real deal crashing the Daytona 500 this weekend.

When Trump arrives Sunday at Daytona International Speedway to deliver the command for drivers to start their engines, the race’s grand marshal might as well be at one of his campaign rallies. High above banners flying for NASCAR stars like Chase Elliott and Kyle Larson, Trump flags wave atop row after row of flashy RVs.

NASCAR, which has a complicated relationship with politics and social issues, doesn’t dare sell the kind of merchandise the president’s loyalists wear to the track. One guy standing in a food line wore a T-shirt with Trump’s image superimposed over a “Sons of Anarchy” homage, tattooed arms folded and smiling as part of the 2020 MAGA Chapter. Two others in a golf cart stopped in front of a makeshift bar in Trump/Pence shirts, getting shoutouts from fellow revelers.

Matt Mansfield, lounging in the infield in nothing but a pair of athletic shorts and camouflage Crocs, was pumped for the president.

“I don’t know if he’s a NASCAR fan,” Mansfield said of Trump. “I think it’s more for the voter base. Get some more votes. ‘Oh yeah, Trump’s here, woo hoo!’”

Fan after fan asked about Trump’s presence were thrilled he was attending the race. Kristi Bodnaruk, who has attended every Daytona 500 since 2005, was one of the few dissenters in the infield.

Trump is the second sitting president to attend the Daytona 500, joining George W. Bush in 2004.

Trump’s dip into sports has been mixed. He has tangled with some of the biggest names in sports over social justice protests during the national anthem, racial issues and White House visits for champions. He was booed at the World Series in Washington, but cheered at the Army-Navy game as well as the national championship game between Clemson and LSU.

Former NASCAR Chairman Brian France in 2015 tried to ban the flying of Confederate flags at race tracks, a proposal too broad to enforce and one that angered stock car racing’s fan base in the Deep South. Later that summer, then-candidate Trump was critical of Mexican immigrants and Marcus Lemonis, the Lebanese CEO of the title sponsor of NASCAR’s Truck Series, lashed out at the remarks. NASCAR canceled its season-ending awards ceremony scheduled for Trump’s Doral property in South Florida.

Months later, France recruited several drivers to attend a Georgia rally for the candidate. France, Chase Elliott and Hall of Famers Mark Martin and Bill Elliott spoke from the stage in support of Trump as they flanked the candidate.

France later that week penned an email to the entire NASCAR organization saying his endorsement was personal and he was not speaking on behalf of NASCAR.

Two Cup Series champions, Martin Truex Jr. and Joey Logano, have been honored at the White House. Kyle Busch, the reigning series champion who visited the White House and President Barack Obama following his 2015 title, said he would go again if invited by Trump. Logano said it was “amazing” Trump was attending “The Great American Race.”

“The leader of our country is coming to the Daytona 500. How cool is that?” Logano said. “That kind of solidifies what our sport is. It’s a huge event. We’re a big sport, and to be able to have the president come here, that’s something we all should be proud of. Whether you support him or not, it doesn’t matter. It shows the unity in our sport and how big our sport really is.”

Had Trump toured the track this weekend, he might have spotted one driver in NASCAR’s second-tier series in a Trump/Pence 2020 paint scheme: Joe Nemechek’s Chevrolet was sponsored by The Patriots PAC of America.

The Daytona 500 is a sellout for the fifth consecutive year, the booze, the flyovers, the celebrities, the flutter of the flags all part of the pageantry for more than 100,000 fans at the kickoff of NASCAR’s season.

Daytona fans were more absorbed with hitting the next party than debating politics as the race approached. The tailgating feast at one stop was fit for a president who served fast food at the White House to college football champions: deep fried honey buns and deep fried Oreos were on the dessert menu — or maybe it was dinner? — and cheap domestic beers easily slipped into NASCAR koozies.

Trump’s supporters have hunkered down at Daytona, comforted by the fact that while their favorite drivers may be different, their love for the president is a deep tie that binds.

“We’re a different group of people,” said Georgia native Scott Gregory, attending his fifth straight Daytona 500. “When you walk around and talk to all these folks, we’re all pretty much of the same mind of what we think of the U.S., leadership, our president, and we’re all pretty much in line as far as that thinking. I don’t think it’s true of other sporting events.”