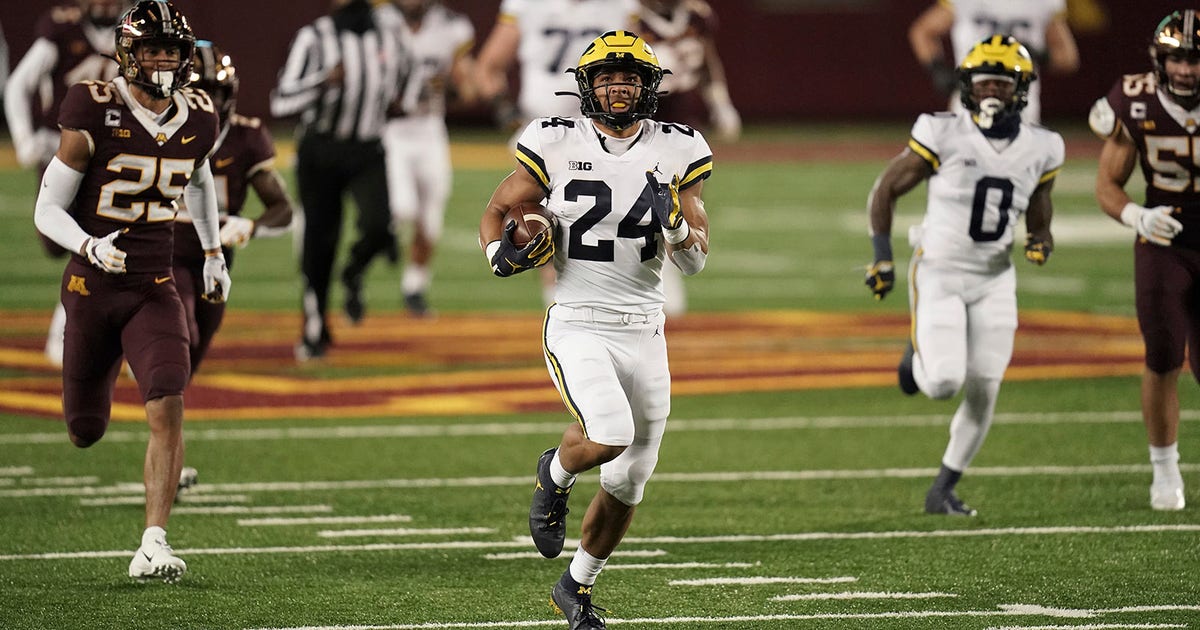 MINNEAPOLIS — Joe Milton accounted for two touchdowns in an unflappable debut at quarterback for No. 18 Michigan, and the Wolverines trampled No. 21 Minnesota with 258 rushing yards in a 49-24 victory Saturday night to open the virus-delayed season.

Zach Charbonnet had a 70-yard scoring run in the first quarter to set the tone for Michigan’s dominance on offense, one of five rushing touchdowns. Donovan Jeter followed by scoring on a 15-yard scoop of an airborne fumble forced by a blitzing Michael Barrett, one of five sacks by the Wolverines. Minnesota’s Tanner Morgan passed for 188 yards and a touchdown, with two turnovers.

Barrett added a 66-yard kickoff return to set up Milton’s scoring pass to Ben Mason that capped a 21-point first quarter to spur the Wolverines to their 13th win in the last 15 conference openers. They have not lost at Minnesota in the battle for the Little Brown Jug trophy since 1977.

With the Wolverines leading 28-17 late in the second quarter, Gophers coach P.J. Fleck ordered a fake punt on fourth-and-4 at their own 31, an obvious sign of how overwhelmed their defense was throughout the game. Tight end Ko Kieft, who gave the Gophers a 7-0 lead with his touchdown catch, took the snap as the upback but was stuffed for a 2-yard loss.

Hassan Haskins rushed six times for 82 yards and two touchdowns for the Wolverines, whose only obvious mistakes were on special teams — allowing a blocked punt in the first quarter and three missed field goals by Jake Moody.

Mohamed Ibrahim rushed for 140 yards and two touchdowns for the Gophers.

The Gophers played without two incumbent starting offensive linemen, right tackle Daniel Faalele and right guard Curtis Dunlap. Dunlap had a cast on his left foot. Another expected starter, freshman punter Mark Crawford, did not suit up. The Wolverines played without tight end Nick Eubanks and had only one backup available for Milton, Cade McNamara, who took the last drive.

The Big Ten assigned the first all-Black officiating crew in the history of the major five conferences, with referee Larry Smith leading the group of eight on-field officials and four others with off-the-field responsibilities. The Big Ten, which launched a series of league-wide social justice initiatives this week, said 22% of its 2020 officiating staff is either minorities or women.

The Wolverines ought to move up several spots after this opening performance when the next Associated Press rankings are revealed on Sunday. Though the FBS conferences are on such different schedules and voting patterns are unpredictable, the Gophers will have a tough time staying in the Top 25 next week.

Michigan marked the fifth AP-ranked foe of Minnesota’s last six opponents. The Gophers beat Penn State and Auburn and lost to Iowa and Wisconsin over their final five-game stretch of last season.

Michigan: Though the returning stable of running backs was strong with Charbonnet and Haskins, Milton took over behind a largely unproven offensive line with a young group of receivers and played with a poise well beyond his experience. The offense under coach Jim Harbaugh has not materialized the way the Wolverines have expected, but this was a promising start.

Minnesota: With seven regulars — including four NFL draft picks — departed from the defense that ranked third in the Big Ten and 10th in the FBS last season with an average of 306.6 yards allowed per game, this new group for the Gophers has a long way to go. Linebacker Braelen Oliver, an expected starter, suffered an unspecified injury in spring practice and did not play.

Minnesota: At Maryland on Friday night.