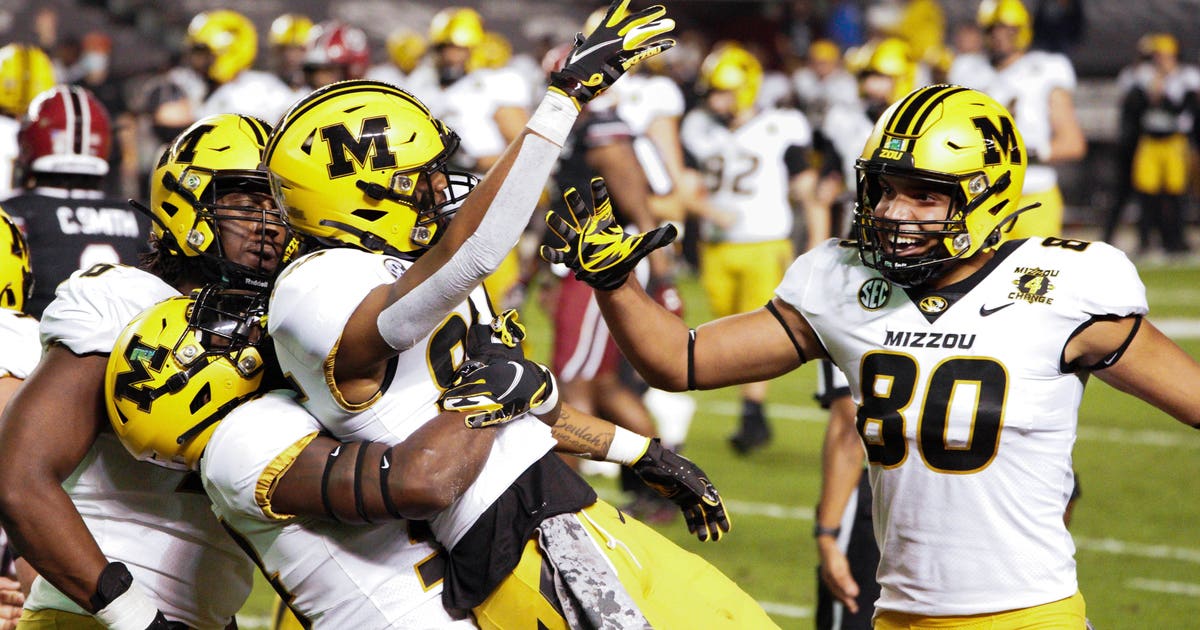 COLUMBIA, S.C. — Connor Bazelak threw for 203 yards and a touchdown as Missouri fended off a late surge by South Carolina for a 17-10 victory Saturday night.

Larry Rountree III rushed for a score and became the Tigers all-time time rushing leader among running backs as the Tigers (3-3 Southeastern Conference) won after not playing since Oct. 31 due to a bye week and a postponed game with Georgia because of COVID-19 issues.

It was the fourth straight loss for South Carolina (2-6), which fired coach Will Muschamp last Sunday and took a half to get itself going.

Bazelak and the Missouri offense weren’t crisp. Then again, they didn’t have to be as the Tigers opened up a 17-0 lead by halftime and kept the Gamecocks off balance much of the way.

The Tigers essentially put the game out of reach on Bazelak’s pretty 20-yard TD throw to Tauskie Dove midway through the opening quarter.

Rountree’s 1-yard burst made it 14-0, and Missouri ended the half with Harrison Mevis‘ 20-yard field goal to head to the locker room up 17-0.

Rountree finished with 58 yards, giving the senior 3,238 for his career and moving him past Zack Abrom who played from 2000-03. Only quarterback Brad Smith is ahead of Rountree’s school career rushing total with 4,289 yards.

South Carolina freshman quarterback Luke Doty provided a second-half spark in place of season-long starter Collin Hill, rallying the team to within a touchdown after Deshaun Fenwick‘s 1-yard TD run made it 17-10.

The Gamecocks had one last drive, but Doty was intercepted by Devin Nicholson and Missouri held on for the win.

Mike Bobo, the first-year offensive coordinator elevated to interim coach, talked this week of settling nerves and restoring effort for a fragile group of players. During the week, several players opted out of the season including starting cornerbacks — and likely NFL draft picks — Jaycee Horn and Israel Mukuamu.

In addition, Bobo said two defensive line starters in Aaron Sterling and Brad Johnson were lost for the year with injuries.

It didn’t help that South Carolina’s most productive offensive player in receiver Shi Smith went to the locker room after a crunching hit in the first quarter and did not return.

That opened things up for the Tigers and Bazelak, who completed 13 of 21 passes for 140 yards in the first 30 minutes.

Missouri: Tigers coach Eli Drinkwitz had a major role in South Carolina’s run of 11 losses in 14 games. He was head coach of Appalachian State last year when it defeated the Gamecocks 20-15 before this Missouri win.

South Carolina: The Gamecocks didn’t win, but may have found a rallying point in freshman Luke Doty, who got the offense going and showed his speed and elusiveness after coming in for starter Collin Hill in the second half.

South Carolina ends its home season against No. 13 Georgia next Saturday night.