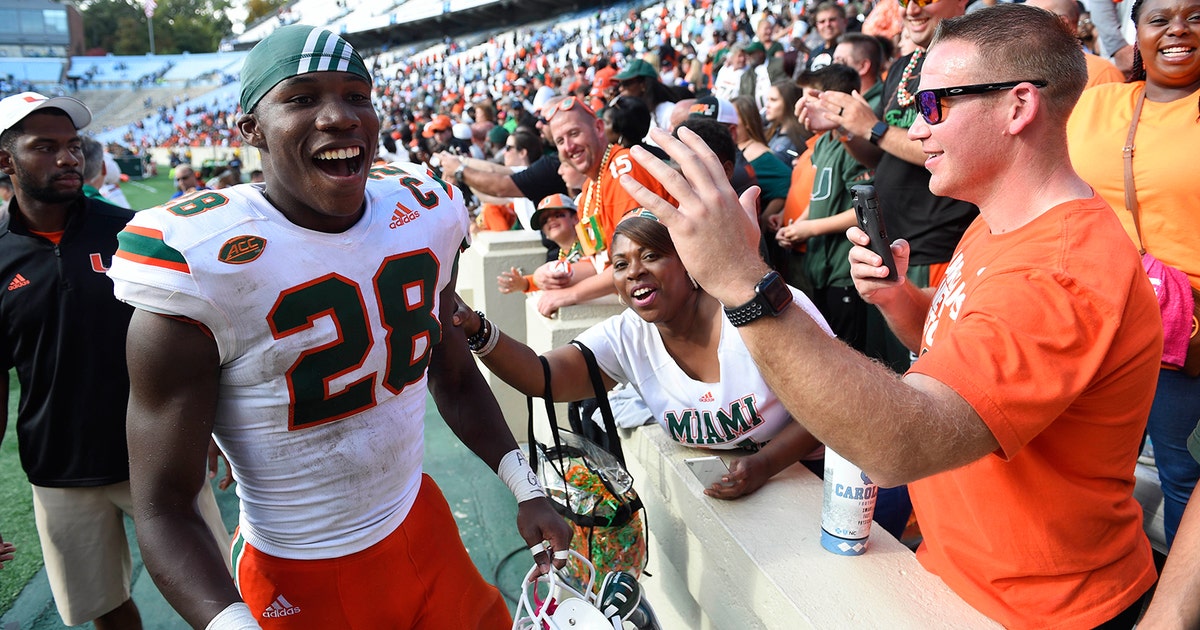 The first College Football Playoff rankings of the 2017 season released on Tuesday night to the typical fanfare — or dismay — of various schools and fan bases around the country. Undefeated Georgia took the No. 1 spot followed by unblemished national powerhouse Alabama and one-loss team Notre Dame.

Barring any half-member claims on the Fighting Irish, the Atlantic Coast Conference enters the mix in the fourth spot nationally — underlining the conference’s precarious place in the championship chase with six weeks remaining.

Dabo Swinney’s one-loss Clemson Tigers, the defending champions, hold down the rankings’ No. 4 position. Fellow league members Miami (No. 10), Virginia Tech (No. 13) and NC State (No. 20) round out the ACC’s contenders. Though far removed from panic mode, particularly in a college football season in which six previous top-10 teams have fallen in the last three weeks alone, the ACC has quickly become a two- or three-team race with little margin for error.

Thanks to Atlantic division chaos, exemplified by the 7-9 combined record of Florida State and Louisville, Notre Dame handing NC State its second loss of the season, Clemson’s loss to Syracuse and Miami and Virginia Tech’s lack of a single win against a current AP top-25 team, the ACC’s path to the playoff looks narrow at the moment — and this weekend poses significant risk to the league’s chances.

The Clemson-NC State and Miami-Virginia Tech showdowns on Saturday are (obviously) crucial to the ACC’s endgame of repeating as national champs. Future upsets and national upheaval could shift the tides down the stretch, but a one-loss Clemson or undefeated Miami could be the ACC’s only probable shots at reaching the four-team bracket.

Every ACC school to appear in top 4 of initial CFP Rankings has gone on to make the playoff (Florida State in 2014 & Clemson in 2015 & ’16). pic.twitter.com/ooxHlVsIT1

If Clemson wins out its resume would be highlighted by true road wins over NC State and Virginia Tech, a victory over Auburn and, in all likelihood, an ACC Championship win over either Miami or Virginia Tech. The Tigers already own six wins over FPI top-40 teams. Miami’s resume-builders line the road ahead with Virginia Tech, Notre Dame and (likely) Clemson in the conference title game, but given the Hurricanes’ soft strength of schedule and lackluster efforts against lesser teams to date it will probably need to be an undefeated run.

The Hokies, sitting at 13th, will be intriguing if they hit their stride and finish the campaign with wins over West Virginia, Miami and redemption in the ACC Championship, but Justin Fuente & Co. will likely need help beyond taking out the two ACC league members ranked ahead of them.

It is worth mentioning that the initial College Football Playoff rankings in previous years have not functioned as crystal-ball predictions. In two of the first three seasons, teams outside the initial top 15 made the final field: 2014 Ohio State and 2015 Oklahoma. And last season’s Penn State team jumped from No. 12 to being the final cut by the playoff committee.

Still, with this weekend pitting the ACC’s four ranked teams against one other, a separation (or elimination) Saturday awaits for the league.