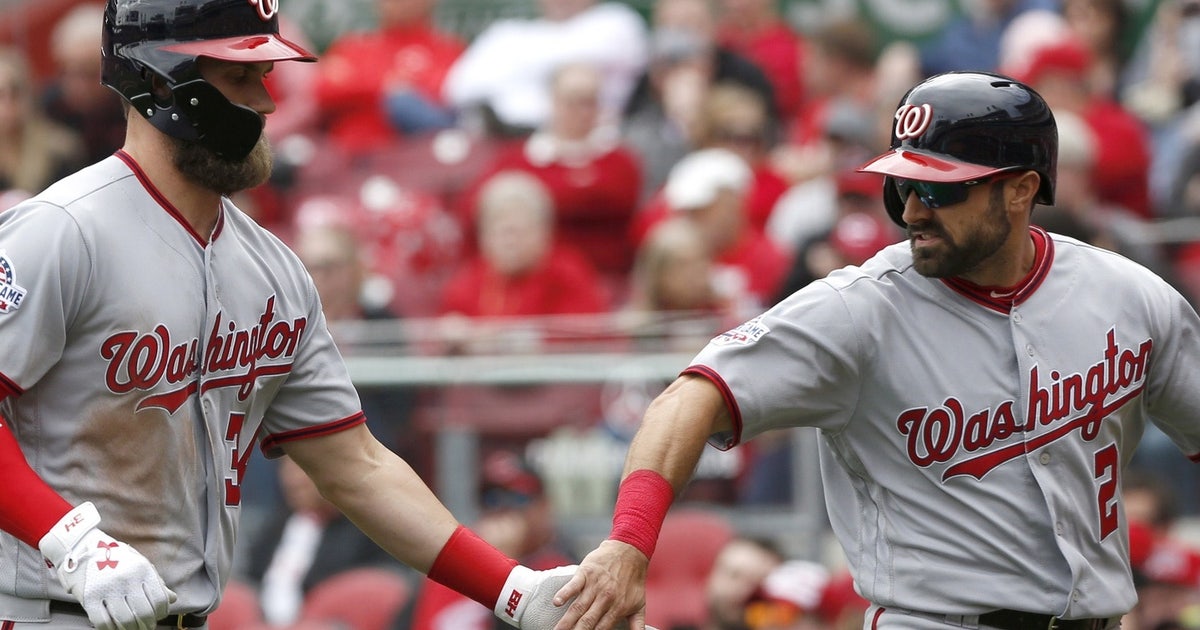 CINCINNATI (AP) — Adam Eaton had solo homer among his career-high five hits and Brian Goodwin hit his first career grand slam on Saturday, powering the Washington Nationals to a 13-7 victory over the Cincinnati Reds.

The Nationals have won their first two games under new manager Dave Martinez, hired after Dusty Baker was fired last season following another quick exit in the playoffs. The last time they opened a season 3-0 was 2013, when they swept the Marlins.

Washington won the rain-delayed opener 2-0 on Friday behind Max Scherzer‘s 10 strikeouts in six innings. The Nationals broke out the bats in the second game, and their leadoff hitter got a potent offense going on a breezy, 59-degree afternoon.

Easton had a single, a pair of doubles, a homer and a bases-loaded single in his five at-bats. He scored four times and drove in three runs as the Nationals went ahead 9-3.

Goodwin hit his slam in the ninth off Kevin Quackenbush. Matt Adams had a three-run homer, and Trea Turner added a solo shot as the Nationals homered four times in all.

Stephen Strasburg (1-0) gave up three runs — only one earned — in 6 1/3 innings while improving to 5-1 career against Cincinnati. Scott Schebler‘s homer in the fourth inning provided Cincinnati’s first run of the season after 12 scoreless innings.

The Reds signed right-hander Yovani Gallardo to a one-year deal for $750,000 and optioned right-hander Zack Weiss to Triple-A Louisville. Gallardo was released by the Brewers on Wednesday. He had a $2 million, one-year deal with Brewers that was not guaranteed — released during the final week of spring training, he got $483,871 in termination pay. Catcher Stuart Turner was designated for assignment to open a spot on the 40-man roster for Gallardo.

Reds: Closer Raisel Iglesias is expected back from his three-day paternity leave on Sunday for the final game of the series.

Reds: Sal Romano went 7-9 in 16 starts last season in his first stint in the majors. He’s never faced the Nationals.