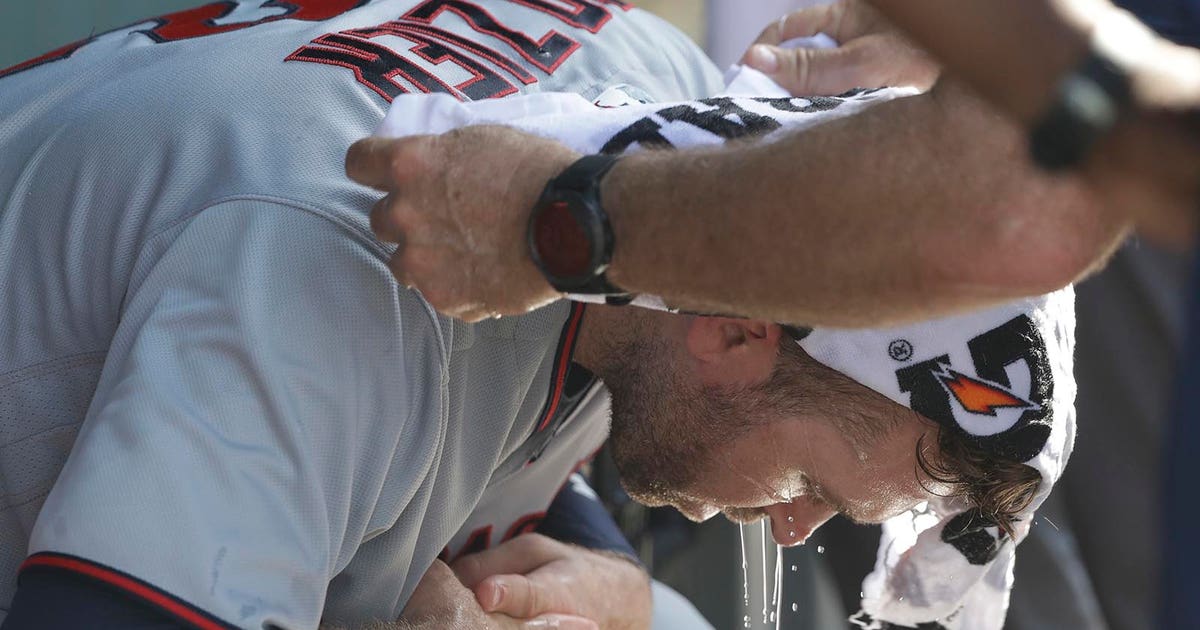 CHICAGO — Minnesota’s Eddie Rosario, Bobby Wilson and Max Kepler all left early because of heat illness on a scorching afternoon at Wrigley Field, and the Chicago Cubs beat the Twins 14-9 Saturday.

Rosario homered in the top of the fifth inning, then was pulled from left field shortly after fielding a hit by Anthony Rizzo in the bottom half. The Cubs said it was 96 degrees at the time with a heat index of 107 — that’s a calculation of how hot it actually feels, with the humidity factored in.

Jason Heyward had four of the Cubs’ 20 hits, Ben Zobrist had three RBIs and Chicago had a pair of five-run innings. The Cubs rallied from 3-0 and 7-4 deficits and have scored at least 10 runs in three straight games for the first time since April 2003.

Albert Almora Jr. had three hits and drove in two runs as the Cubs won their third in a row. He exited in the fifth after apparently injuring a leg running the bases.

Joe Mauer had two hits and three RBIs for the Twins.

There was a short break in the sixth after Wilson drew a walk. A couple of cups of water were brought out for him to sip and douse himself to cool off. Wilson eventually scored and was replaced at catcher after the inning ended with the score tied at 9.

Willians Astudillo, primarily a catcher in the minors, made his major league debut and wound up playing center field for the Twins, his first time at that spot as a pro. He hit an RBI single in his first at-bat.

Home plate umpire Hunter Wendelstedt worked with a towel draped around his neck and frequently left the field between innings.

Chicago broke open a tie game with a five-run seventh.

David Bote led off with a walk and Ian Happ doubled off reliever Trevor Hildenberger (1-2). It was Chicago’s 15th hit to that point — and first extra-base hit.

After pinch hitter Kyle Schwarber was intentionally walked to load the bases, Heyward hit a soft liner that just scooted over the head of shortstop Ehire Adrianza — with the infield playing in — for an RBI single and a 10-9 lead. o plate Bote and give the Cubs a 10-9 lead. Baez hit a grounder up the middle, just out of Adrianza’s reach with the infield playing in, for two more runs.

Justin Wilson (2-2) pitched a scoreless inning for the win.

Twins: CF Byron Buxton (fractured left big toe) has been on a rehab assignment with Triple-A Rochester since June 19 and there’s no timetable for when he’ll be activated from the DL. Buxton was hitting .206 with a homer and four RBIs in nine games with Rochester before Saturday. If he continues to struggle, there’s a chance he could be optioned to Rochester when his rehab assignment ends on July 8.

Cubs: RHP Carl Edwards Jr. (right shoulder inflammation) threw 19 pitches and got two outs during a rehab outing with Triple-A Iowa on Friday. Manager Joe Maddon said the reports were positive and that his “velocity was normal.” Edwards is expected to pitch again either Sunday or Monday.