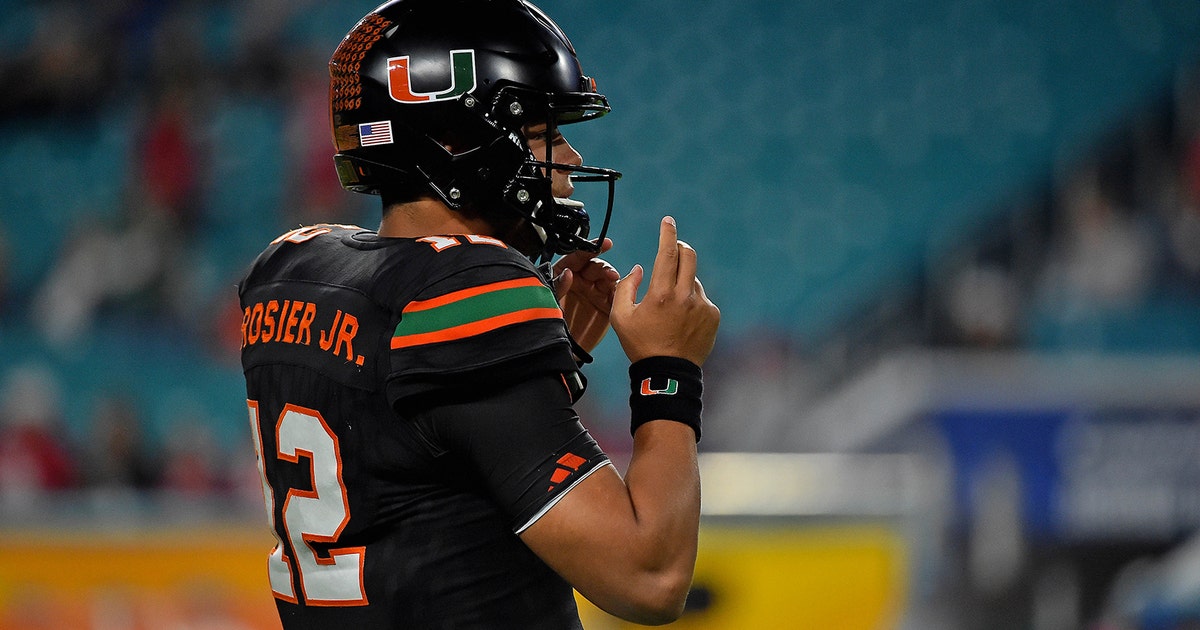 CORAL GABLES, Fla. (AP) — Miami quarterback Malik Rosier wears a large jersey on game days, enough to fit him and all of his protective gear quite comfortably.

This year, that shirt will also have to accommodate the proverbial chip on his shoulder.

It got that way for a reason.

Here’s all that Rosier managed to do last season: Throw for 26 touchdowns, run for five more, lead Miami to a 10-0 start, get the Hurricanes as high as No. 2 in the Top 25 and help the school reach its first Atlantic Coast Conference championship game. And yet he knows he still has doubters, even some within the Miami fan base, as he gets set to begin his second season as the starter for the eighth-ranked Hurricanes.

There was a time that those doubters bugged him. That’s no longer the case, and his confidence level going into Sunday night’s opener against No. 25 LSU in Arlington, Texas, is as high as ever.

“Everyone has their own opinion,” Rosier said. “Obviously, you can’t satisfy everybody. But I feel like everyone inside this team knows and that’s all that matters. You can’t worry about outside people. They’re not here practicing. They’re not working out with us. They’re not running with us. … Fans, that’s their agenda. But our thing is, whatever guy is playing, that’s the guy you support 100 percent.”

On this Miami team, that’s Rosier.

He is unquestionably the top QB at Quarterback U, having won the starting job again despite having no fewer than three quarterbacks behind him who could probably start for plenty of other major schools around the nation. Miami grades every throw from every practice in three different categories, and Rosier now is well ahead of where he was on those charts a year ago.

“Malik is constantly getting better, more comfortable with what we’re doing,” coach Mark Richt said. “There’s a lot more knowing what to do, exactly how everything works, understanding our system, how it relates to our defense and any defense that we play. Plus, 13 games of experience, it’s hard to replace that.”

Rosier wasn’t perfect in 2017, and his accuracy was a major concern. He completed only 54 percent of his passes a year ago — and out of the 35 quarterbacks in major college football who attempted at least 400 passes last season, that percentage ranked Rosier dead last, 35th, some 16.5 percentage points behind No. 1 overall pick and Heisman Trophy winner Baker Mayfield.

So Rosier got serious about throwing a more pinpoint ball. He analyzed each and every one of his throws. He studied harder. He even enlisted the help of former Miami quarterback Brad Kaaya, who was the starter for three years before leaving school for the NFL in a move that helped elevate Rosier to the top of the depth chart.

“It just helps now that these guys look to me as a leader because I’ve been there, I’ve played in big games, I’ve won in big games,” Rosier said. “I just have to do the same thing, just go out there and execute.”

Miami ran out of steam and bodies toward the end of last season, when that 10-0 start became an 0-3 slide to finish the year — a loss at Pitt, followed by a blowout loss to Clemson in the ACC title game and then a defeat against Wisconsin in the Orange Bowl.

Rosier struggled in all three of those games, and the dropoff was massive. In the 10 wins, he had 23 touchdowns, nine interceptions, five rushing touchdowns, a 56 percent completion rate and a 141.7 quarterback rating. In the three losses, he had three touchdown throws, five interceptions, no rushing scores, a 45 percent completion rate and 92.0 quarterback rating.

The three losses are what has fueled him since.

“Last year I was kind of fighting for the job, trying to prove myself,” Rosier said. “I feel like this year, it’s not about just getting to those games — it’s about winning those games. The standard’s set higher than it was last year, especially for me.”

It’s not just him, and Rosier knows that.

Miami thinks it has more depth now than at any point in recent years, and Rosier points to one particular point as evidence. He said when he got to Miami, it wasn’t uncommon to find walk-ons filling the second-string jobs. On this team, there’s a slew of scholarship players on the third string.

“That’s the evolution of our offense,” Rosier said. “We have more talent. We have a bigger skill base. We were good last year, but this year, I think we should be better.”