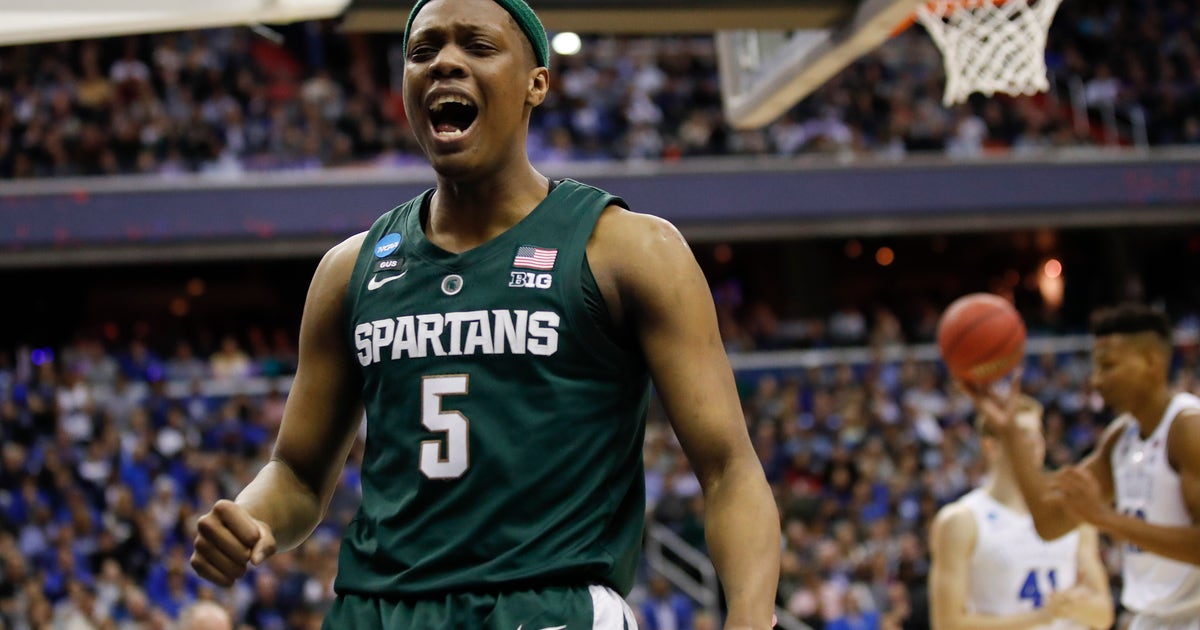 WASHINGTON (AP) — Cassius Winston put Michigan State on his shoulders and carried the Spartans into the Final Four.

The do-everything point guard took over the game when his team faced its biggest deficit and led second-seeded Michigan State to a 68-67 victory over overall No. 1 seed Duke on Sunday in the East Region final.

Duke boasted the biggest stars in Zion Williamson and RJ Barrett, but Winston shined brightest to put Michigan State in the Final Four for the first time since 2015. Winston had 20 points and 10 assists, made nine of his 23 shots and never shied away from shooting.

Michigan State will play Texas Tech in one national semifinal Saturday in Minneapolis. Virginia faces Auburn in the other.

Winston was the facilitator but the Spartans received a huge boost from their oldest player. Kenny Goins, a fifth-year senior who missed his first four 3-point attempts, drained the go-ahead shot with 34.3 seconds left to put Michigan State up 68-66.

Duke had the chance to tie but Barrett missed the first of two free throws with 5.2 seconds left. Duke was helpless with only four fouls, and Winston was able to get the ball away from the Duke defenders and dribble out the clock.

“I love you all, I appreciate you all. I’ll see you in Minneapolis” Izzo, who wiped away tears, told the celebrating crowd that included Michigan State alumnus Magic Johnson.

Izzo had to navigate foul trouble to big man Xavier Tillman, who was essential in guarding Williamson and factoring in on the offensive end. Tillman played 29 minutes and scored 19 points on 8 of 12 shooting.

Duke fell one step short of the Final Four after finally coming out on the losing end of a nail-biter. The Blue Devils won their previous two NCAA Tournament games by a combined three points, and escaped in the final seconds only when their opponents missed at the buzzer.

Williamson finished with a game-high 24 points and 14 rebounds. Barrett had 21 points — but not the one that could have sent the game into overtime.

Cam Reddish didn’t start for Duke but the freshman was the first player off the bench two minutes in after being a game-time decision. Reddish missed the Sweet 16 victory against Virginia Tech on Friday with a left knee injury.

Reddish missed his first two shots before his two free throws gave Duke its first lead at 22-21 with 7:10 left in the first half.

While this is the Spartans’ 10th Final Four, it’s the first in program history for their opponent, Texas Tech, which beat Gonzaga to win the West Region.