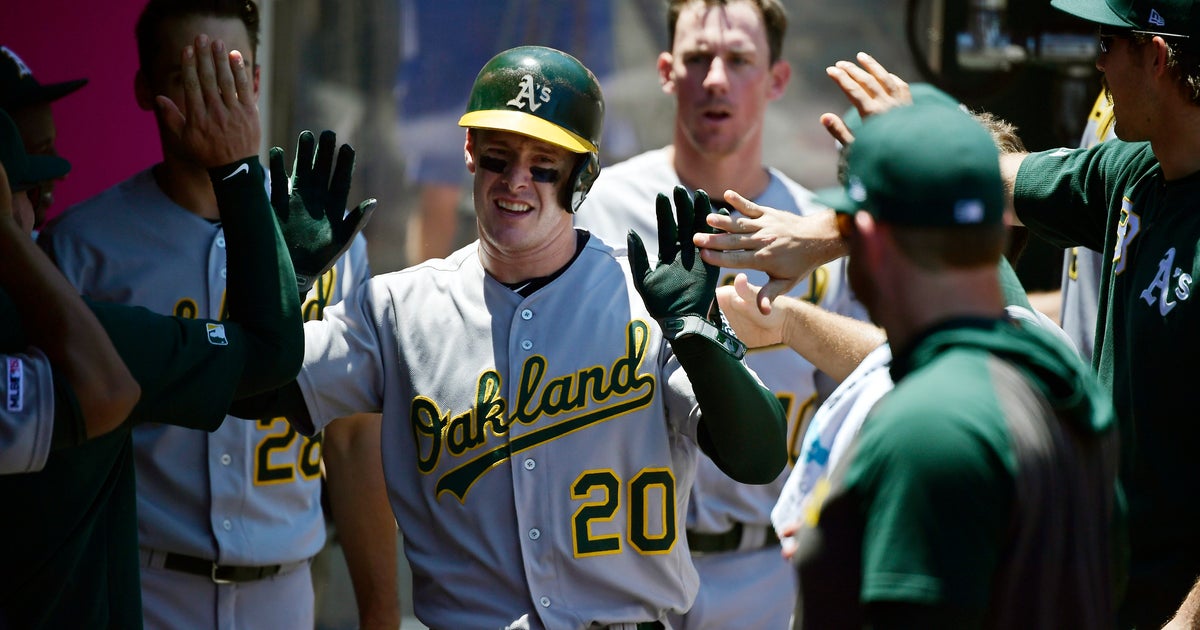 ANAHEIM, Calif. (AP) — Matt Chapman hit a three-run homer, a triple and a three-run double on the day he was named to his first All-Star team, and the Oakland Athletics beat the Los Angeles Angels 12-3 Sunday to take three of four from their AL West rivals.

Chapman racked up a career-high six RBIs starting with his 21st homer in the fifth inning, shortly before he learned of his selection to the midseason showcase in Cleveland.

The slugger then got two extra-base hits in the eighth. He led off the inning with a triple before clearing the bases with his double after two errors by the Angels prolonged the A’s seven-run rally.

Shohei Ohtani hit two homers for the Angels, who wrapped up their final homestand before the All-Star break by losing three straight at home to a team they’re chasing in the division standings.

Chapman homered in his second straight game and reached base in his 17th consecutive game. He began the day tied for the AL lead with 42 extra-base hits and tied with Nolan Arenado for the major league lead in homers among third basemen.

Ramon Laureano drove in two runs for the A’s, who have won five of six overall.

Angels second baseman Tommy La Stella learned of his first All-Star selection while he walked up to the plate in the sixth inning, acknowledging the cheers and the scoreboard announcement with a wave. La Stella then singled in his next three at-bats after the announcement, producing his sixth multi-hit game in his past 10 starts.

Los Angeles dropped back below .500 after getting a season-high two games above the mark Thursday.

Ohtani connected on leadoff homers in the fourth and eighth innings for his third career multihomer game, his first at Angel Stadium.

His shot in the eighth didn’t mean much after Oakland’s seven-run rally, but it traveled 447 feet high into the right field stands. The AL Rookie of the Year already has 12 homers and 35 RBIs since making his season debut May 7, including two on this homestand.

Andrew Heaney (1-2) yielded five runs over six innings of six-hit ball for the Angels, giving up Chapman’s big shot after a mound visit in the fifth.

Before the eighth-inning rally secured the win, Oakland’s bullpen stranded two runners apiece in the sixth and seventh innings. Joakim Soria froze Mike Trout with a slider for a called third strike to end the seventh.

Athletics: OF Stephen Piscotty went on the 10-day injured list after spraining his right knee Saturday night while sliding into second. Oakland recalled INF Franklin Barreto, who started at second. Piscotty was scheduled to have an MRI on Sunday. … OF Khris Davis didn’t start for the third straight game after getting hit on the hand with a pitch Thursday.

Angels: Reliever Cam Bedrosian left in the eighth inning after Robbie Grossman’s comebacker glanced off his glove and into his face.

Athletics: After a day off, Daniel Mengden (2-1, 4.03 ERA) takes the mound in Oakland for a series opener against the Minnesota Twins and AL wins co-leader Jake Odorizzi (10-3, 2.73 ERA).