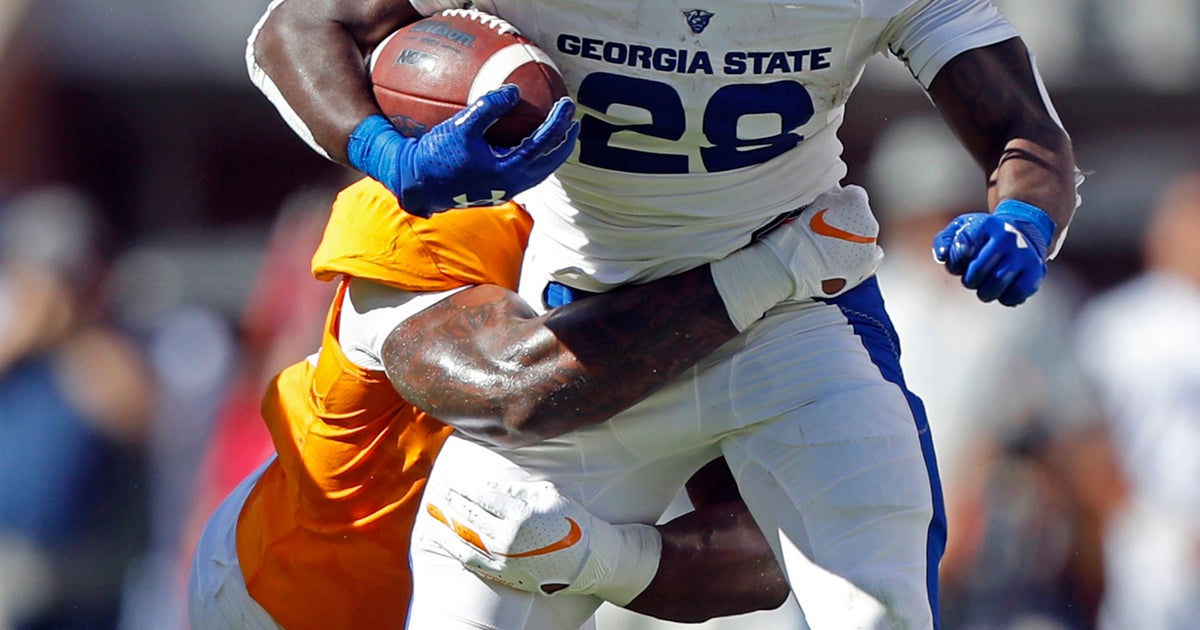 KNOXVILLE, Tenn. (AP) — Dan Ellington threw two touchdown passes and ran for a third score as 26-point underdog Georgia State upset Tennessee 38-30 on Saturday in one of the first stunners of the college football season.

Georgia State (1-0) beat a Power Five opponent for the first time since this Sun Belt Conference school launched its program in 2010. The Panthers’ closest call before this had come in 2016, when they lost 23-17 to Wisconsin after leading in the fourth quarter.

Tennessee (0-1) suffered one of the more embarrassing setbacks in its history, the latest blow for a storied program attempting to bounce back from two straight losing seasons.

Georgia State was coming off a 2-10 season in which it had lost its last seven games. Only one of those seven losses was decided by less than two touchdowns.

But the Panthers outplayed and outworked Tennessee on Saturday.

The hard times for Tennessee were evident from a look at the Neyland Stadium stands. Although the announced attendance was 85,503, thousands of fans apparently left at halftime and many others headed for shaded areas, leaving plenty of sections of the 102,455-seat facility virtually empty as Tennessee attempted its comeback.

Tra Barnett put Georgia State ahead for good 28-23 when he raced untouched around the right side with 8:56 remaining. Barnett ended up rushing for 95 yards on 21 carries.

Tennessee crossed midfield on its next possession before Jaylon Jones came in from Guarantano’s blind side and sacked him, forcing a fumble that Georgia State’s Jhi’Shawn Taylor recovered at the Vols’ 39 with 7:10 left.

That led to the game-clinching touchdown by Ellington with 4:45 left.

Ellington faked a handoff and then made multiple moves to elude defenders before running into the left corner of the end zone for a 22-yard score that left Tennessee defensive backs Alontae Taylor and Shawn Shamburger lying on the field hurt as the Panthers celebrated in the end zone.

Brandon Wright made it 38-23 by kicking a 48-yard field goal with 2:37 left after a Guarantano interception. Guarantano ended up 26 of 40 for 311 yards with two touchdowns, including an 18-yarder to Jauan Jennings that capped the scoring with two seconds remaining.

A huge momentum swing early in the fourth quarter made it seem as though Tennessee would avoid the upset.

Georgia State led 21-20 and had the ball at Tennessee’s 19-yard line when DeAndre Johnson sacked Ellington, forcing a fumble that LaTrell Bumphus recovered for the Vols.

On the next play, Guarantano found tight end Dominick Wood-Anderson wide open down the left sideline for a 54-yard gain. That completion set up a Brent Cimaglia 31-yard field goal that put Tennessee ahead 23-21 with 12:05 left.

That’s the moment when the Panthers could have let the game get away from them. They instead regrouped and delivered the most memorable moment this program has ever produced.

Georgia State: Ellington’s a senior quarterback who showed the kind of veteran moxie that’s needed to produce this kind of upset. After completing just one of his first nine passes, Ellington ended up going 11 of 24 for 139 yards and two touchdowns. He also ran for 61 yards on 14 carries. Most importantly, he found a way to bounce back after committing the turnover early in the fourth quarter that helped Tennessee take the lead.