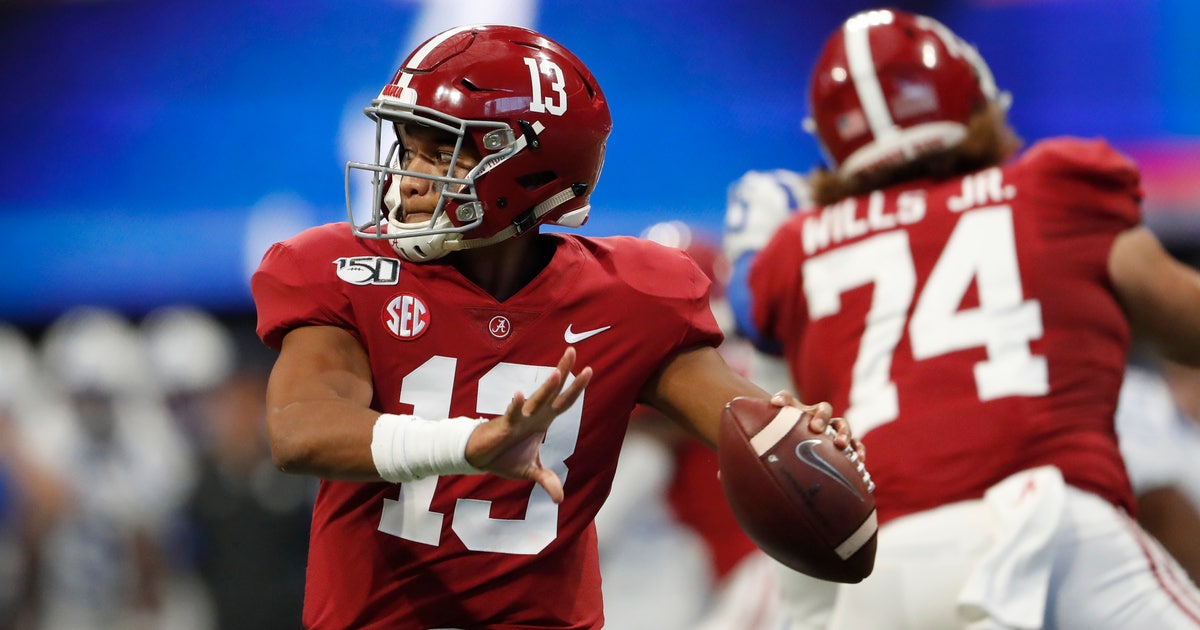 ATLANTA (AP) — Tua Tagovailoa threw for 336 yards and four touchdowns as No. 2 Alabama overcame a sluggish start to blow out Duke 42-3 Saturday in the Chick-fil-A Kickoff Game.

Returning to the stadium where they won the Southeastern Conference title last December and the national championship two seasons ago, the Crimson Tide (1-0) was held scoreless in the first quarter — which happened only one time in 2018.

But the Blue Devils (0-1) merely delayed the inevitable.

Tagovailoa put his tight ends to good use. The left-hander hooked up with Miller Forristall on a 27-yard touchdown pass and then went to Major Tennison for a 1-yard score

Alabama’s dynamic receiving corps also got in on the fun. DeVonta Smith hauled in an 8-yard TD pass and Jerry Jeudy broke loose for a 21-yard score.

Jerome Ford and Brian Robinson Jr. ran for the Tide’s other TDs.

Fields, the five-star transfer from Georgia, made it look easy early, engineering touchdowns on Ohio State’s first four drives. Despite some occasional rookie mistakes that caused the Buckeyes’ offense to sputter in the second and third quarters, Fields finished 18 for 25 for 234 yards and a 51-yard touchdown run.

Meanwhile, Florida Atlantic had trouble generating anything good until putting together a 75-yard drive in the fourth quarter for its first touchdown of the game.

Chris Robison finished 22 for 34 for 178 yards for the Owls. FAU was held to just 22 yards on the ground by a revamped Ohio State defense that was coming off a down season.

SEATTLE (AP) — Jacob Eason threw for 349 yards and four touchdowns in his first game in nearly two years in his Washington debut.

Taking his first snaps since the 2017 season when he lost the starting job at Georgia to Jake Fromm, Eason showed no rust, carving up one of the top FCS programs in the country. Eason completed 27 of 36 passes and led Washington (1-0) on touchdown drives on four of its first five possessions.

Eason’s fourth pass in purple was a 50-yard touchdown strike to Andre Baccellia. Eason added a 7-yard TD pass to Aaron Fuller, who made a stunning one-handed catch while getting a foot inbound, and capped his first-half with a 10-yard TD strike to Chico McClatcher late in the first half.

Fuller caught his second TD on the opening drive of the second half on a perfect back-shoulder throw from Eason, tapping his toes as he fell out of bounds.

Richard Newton rushed for a 23-yard touchdown on Washington’s first possession and Salvon Ahmed added a 1-yard plunge in the third quarter to give the Huskies a 42-7 lead.

Eastern Washington (0-1) quarterback Eric Barriere was 21 of 35 for 211 yards, but was sacked four times.

Making his first career start, Clifford chipped in 57 rushing yards on seven carries and hooked up with receiver KJ Hamler for scoring strikes of 36 and 21 yards.

Journey Brown and Noah Cain both added a pair of touchdown runs while Ricky Slade, Devyn Ford and Nick Eury each ran for scores. Jake Pinegar kicked two field goals and Jordan Stout made another for Penn State (1-0). Will Levis threw a touchdown pass to tight end Brenton Strange in the fourth quarter.

The Nittany Lions overcame early sloppiness before coasting the rest of the way to their biggest point total since an 81-0 win against Cincinnati in 1991.

Idaho didn’t cross midfield until halfway through the second quarter, managed just one first down in the first half, went 1 for 15 on third down and finished with just 145 yards, compared with Penn State’s 673.

Mason Petrino got the Vandals on the board with a 1-yard touchdown pass to Logan Kendall in the fourth quarter.

La’Michael Pettway had a pair of touchdown catches for the Cyclones (1-0), who barely survived the season’s first major upset after entering the year ranked for the first time since 1978.

Croney fumbled near the goal line on the second-to-last play of the game. But quarterback Brock Purdy sprinted from the backfield to recover it at the 1 and set up the game-winning plunge.

After the teams traded field goals in the first overtime, Purdy found Pettway — a graduate transfer from Arkansas in his Iowa State debut — in the back of the end zone. But Northern Iowa pulled even at 23-all after freshman Will McElvain scrambled long enough to free up Trevor Allen for a 7-yard TD catch.

Iowa State forced Northern Iowa into a field goal to start triple overtime, and Purdy completed three straight passes before pulling off what might end up being remembered as a season-saving recovery.

McElvain finished with 228 yards passing and a touchdown in his collegiate debut.

LINCOLN, Neb. (AP) — Nebraska scored two defensive touchdowns and one on special teams to bail out a sluggish offense.

The five-touchdown favorite Huskers led only 14-7 at halftime and totaled just 66 yards in the second half. But their defense had five takeaways, the biggest one Eric Lee Jr.’s 38-yard interception return for a touchdown, and JD Spielman ran back a punt 76 yards to make it a three-touchdown game early in the third quarter.

Any easing of the anxiety at Memorial Stadium was temporary. South Alabama converted two straight turnovers into touchdowns to cut it to 28-21 and had the ball heading into the fourth quarter.

Things started turning for Nebraska when Cam Taylor hammered Jaguars quarterback Cephus Johnson, popping the ball loose, and Alex Davis picked it up at the goal line and stepped into the end zone for a touchdown.

Then, with South Alabama threatening from the Nebraska 12, Taylor stepped in front of Johnson’s pass and ran in back to midfield.

STANFORD, Calif. (AP) — K.J. Costello threw a 2-yard touchdown pass before getting knocked out of the season opener on a late hit and Stanford went on to beat Northwestern.

Costello completed 16 of 20 passes for 152 yards and the TD pass to Michael Wilson that capped a 90-yard drive in the second quarter for the Cardinal (1-0). But his day ended early when he was hit with a forearm to the facemask while sliding on a scramble by Earnest Brown IV with just 2 seconds remaining in the first half.

Brown was called for a late hit that set up Jet Toner’s 51-yard field goal but wasn’t ejected for targeting. Costello stayed down on the turf for a few minutes before being helped to the locker room. He didn’t return to the game and there was no immediate word on his condition.

Northwestern also lost a quarterback with TJ Green leaving with a leg injury in the third quarter after being sacked and losing a fumble on a play in the red zone. Green had replaced the ineffective former Clemson five-star recruit Hunter Johnson late in the first half.

Johnson came back in to finish and went 6 for 17 for 55 yards and two interceptions. He also lost a fumble that Stanford’s Jordan Fox recovered in the end zone for a touchdown that sealed the game with 20 seconds remaining.