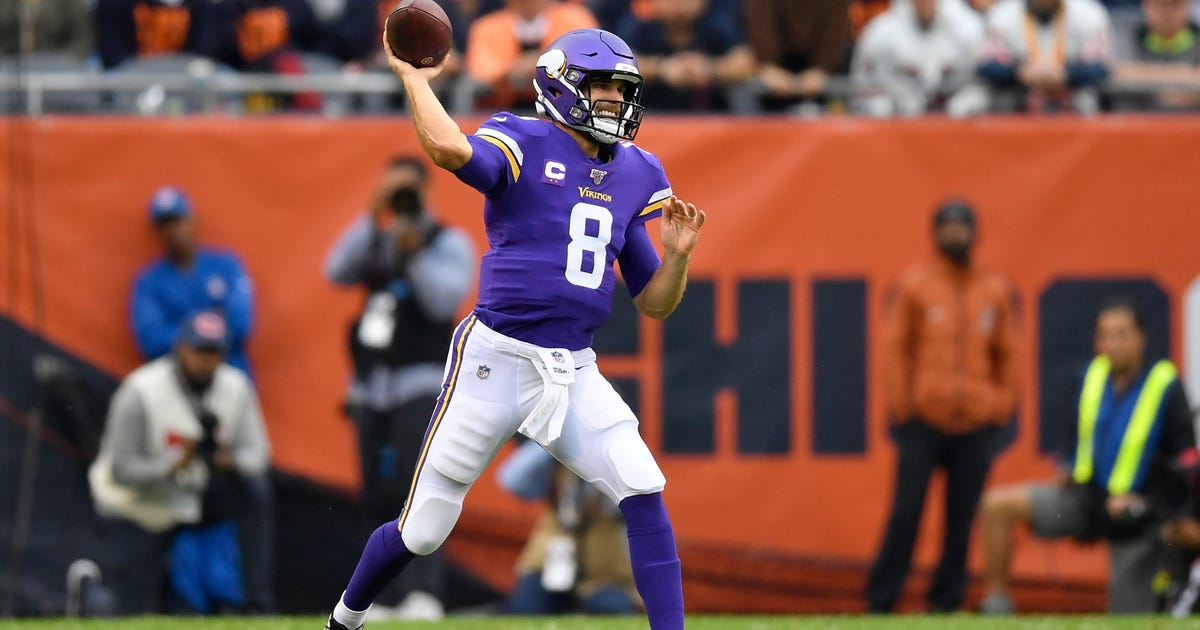 EAGAN, Minn. — Even as the Minnesota Vikings had league-leading rushing totals the first three weeks of the season with Dalvin Cook, the team understood that, eventually, it would need quarterback Kirk Cousins to make plays through the air.

When they were needed in Week 4 at Chicago, Cousins and the passing game couldn’t deliver.

Against Khalil Mack and the Bears‘ pass rush, Cousins was sacked six times and fumbled twice in the 16-6 loss. He was 27 of 36 for 233 yards passing but averaged just 6.47 yards per attempt while resorting to short throws to try and negate Chicago’s pressure.

“I think there were some times where he might have got rid of it a little bit too soon,” Vikings coach Mike Zimmer said Monday. “But when you’re getting pounded a few times, sometimes you got to take the quick throw.”

Cousins overthrew Adam Thielen on one deep pass early that likely would have resulted in a touchdown.

“There’s times you’ve just got to pull the trigger,” Zimmer said. “You’ve just got believe that you’re going to make the throw. There were some times that he got the ball out really good.”

The frustration was apparent with Thielen, who said after the game the team knew, at some point, it wouldn’t be able to rely solely on the running game.

Chicago scored a touchdown on its opening possession, the second straight road game against an NFC North opponent in which Minnesota’s defense has gotten off to a slow start. The Vikings, however, have been able to adjust in-game.

In Week 2, Green Bay had 165 total yards over the final 44:16 after scoring on its first three possessions. The Bears had 194 net yards the remainder of the game after driving 75 yards on their opening possession.

“We had to get up on the receivers a little bit tighter,” Zimmer said. “We were giving them too many easy completions there.”

An offensive line that had opened holes for the league-leading running game and allowed just two sacks the first three weeks faltered against the Bears. Cousins was sacked six times and the Vikings averaged 2.5 yards per rush. Sunday showed the reworked line is still a work in progress.

“Offensively, I didn’t feel like we matched the intensity of their defense,” Zimmer said.

Linebacker Eric Kendricks doesn’t get the recognition of some of his Pro Bowl teammates, but he’s been in the middle of the action all season. He led the team with 12 tackles against Chicago and has been a steady performer against the run and pass.

Left tackle Riley Reiff had a tough time dealing with Mack, who beat Rieff on the first play of the second half for a strip-sack, leading to a Bears field goal. The team’s highest-paid offensive lineman, Rieff can’t be relied on to slow down a star pass rusher like Mack.

Safety Anthony Harris missed 15 defensive plays on Sunday, but the team hasn’t specified an injury. All Zimmer would say Monday is that Harris has a bruise. Right guard Josh Kline missed Sunday’s game with a concussion, and Dakota Dozier started in his place.

The good news was linebacker Anthony Barr returned after missing a game with a groin injury and cornerback Mackensie Alexander was back after missing two games with an elbow injury.

15: The number of times Cousins has fumbled in 20 career games with the Vikings. He’s lost nine fumbles in that span.

Perhaps the passing game can get on track next week as Minnesota travels to New York to face the Giants. New York has allowed 279.5 passing yards per game, the ninth-highest total in the league. The next week, the Vikings face the 32nd-ranked Eagles pass defense.