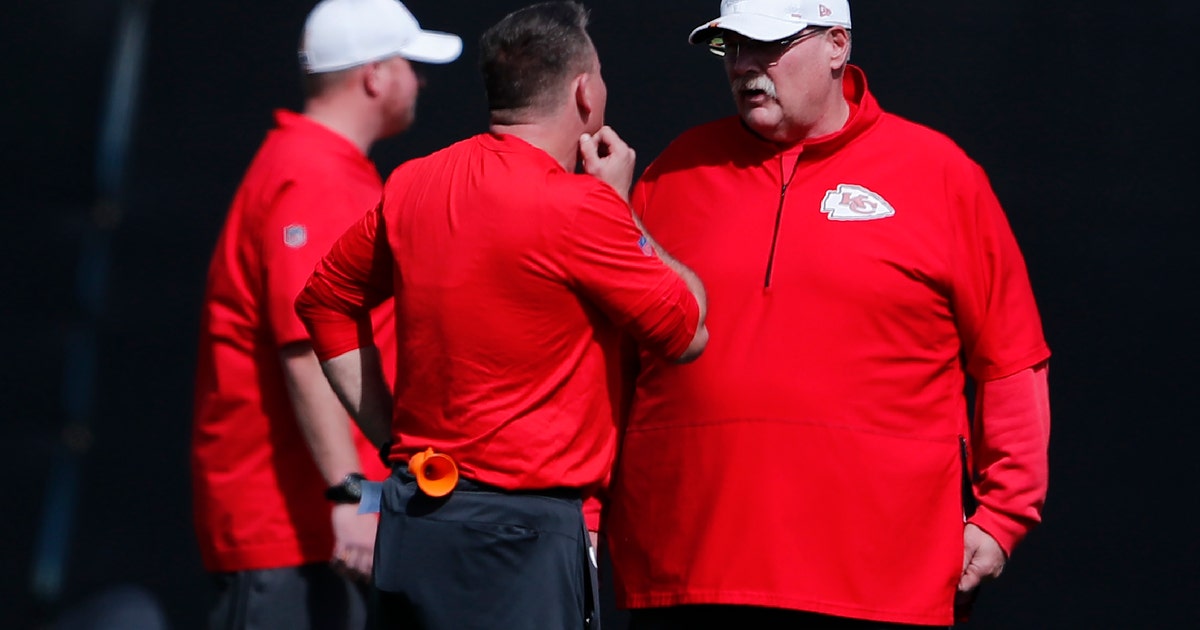 MIAMI (AP) — Andy Reid is often asked how he comes up with the wild plays that have become a hallmark of the Kansas City Chiefs.

His son provided the best explanation yet this week.

Big Reid was was born to parents, Britt Reid explained, who imparted in him wildly different skill sets. The science, math and traditional book smarts came from Elizabeth Reid, who was a radiologist. The creativity and artistry came from Walter Reid, who was a scenic artist in Hollywood who designed backgrounds and props for television, film and stage shows.

“That’s two drastically different people,” said Britt, who coaches Chiefs outside linebackers. “My dad is actually a great artist himself. He can do caricatures — I mean, a lot of stuff. Carvings, stuff like that. Of anybody. He’ll just whip them up. So he’s got that side, then he’s got that intellectual side that his mother passed along, the more refined, calculating side.

“I think that serves him well, in this business especially.”

Britt said his father will often doodle plays on 5-by-7 note cards in his spare time, then share them with the rest of the coaches and quarterbacks. If they like an idea, they’ll try the play design in practice. One or two a week usually make it from the practice field all the way to the game plan. When they work, the Chiefs coach will usually smile and wink.

“When you think about it,” Britt said, “it all makes sense. These plays are basically art. It’s all about lines. You draw those route trees, you’re drawing art, really. It’s easy to see the connection.”

And that’s part of why the Chiefs play San Francisco on Sunday in the Super Bowl.

PRESCOTT NOT WORRIED ABOUT NEW DEAL

Dak Prescott might be among the list of quarterbacks hitting free agency in March, or he might find himself preparing for his fifth season with a new coach in Mike McCarthy and the Dallas Cowboys.

He’s choosing not to worry about that right now.

“I worry about what I can,” Prescott told The Associated Press. “I control what I can control, and that’s it. The rest is out of my hands, and so it’s not a focus of mine. I’ve got a great agency. I’ve got a great team that I’m confident will get something done. I have confidence in the Cowboys as well that we’ll figure something out.”

If the Cowboys and Prescott agree to a new contract, the quarterback will have a new coach in McCarthy who was hired earlier this month to replace Jason Garrett after Dallas missed the playoffs in six of his nine seasons. Prescott says he’s very excited at the chance to work with McCarthy.

“He won a Super Bowl,” Prescott said. “That’s what I want. That’s the goal. At the beginning of the season, that’s what you want. That’s the whole reason to play this game. Anytime a coach comes in the locker room and he has one of those, I want to follow him. He has the method, he has the formula, he has the way to get to what I want. I’m going to follow him. I know the rest of the team is the same way, and we’re excited for it.”

The easiest choices for betting the Super Bowl may be Chiefs or the Niners. For folks wanting to bet on so much more, there’s odds for everything from how long Demi Lovato holds the word “brave” when singing the national anthem to the color of liquid poured over the winning coach.

A wardrobe malfunction remains open for betting, with yes having 10-1 odds.

People can bet on whether or not a player will be arrested in Miami after the game; if the power will go out inside Hard Rock Stadium during the game; the winner of the Puppy Bowl; and even which quarterback will be shown first during the national anthem. BetOnline has 6-1 odds that a player will raise a fist during the anthem and 10-1 that someone takes a knee.

Bet on whether a fan runs on the field and whether security, a player or staff member has the first tackle.

The over/under for the game itself was 54.5 on Friday, the fifth-highest total in Super Bowl history according to SportsBetting.ag. Three of the four that were higher all went under. The Chiefs have gone from 1 1/2-point favorites down to 1 thanks to bets, and only three other Super Bowls have had a spread of 1 1/2 points or less.

The most lopsided prop bet might be the length of the national anthem. Lovato’s rendition originally was set at 1 minute, 56 seconds, with 84 percent betting she’ll go over 2 minutes, 1 second. If Lovato holds the note on “brave” for longer than 5.5 seconds, then bookies could be hurting, according to SportsBetting.ag.

Seattle quarterback Russell Wilson is branching out as co-owner and chairman of NFL FLAG in a move designed to boost the non-contact sport both in the United States and internationally.

Wilson will work with Izell Reese, a former NFL safety and president of Reigning Champs Experiences, to support the league’s development and work to grow the sport for boys and girls worldwide. RCS is an operating partner of NFL FLAG, producing youth sports events. Wilson already has worked with flag football groups in China, Brazil, Canada and the United Kingdom.

Troy Vincent, executive vice president of NFL football operations, said Wilson has the ability to bring people together and will help American football’s growth around the world. Wilson will make his first official appearance as co-owner and chairman at the NFL FLAG Summit during the NFL draft in Las Vegas.